WE EMPOWER OUR TRADERS
TO REACH NEW HEIGHTS

through excellence in teamwork, communication & support.

Our mission is to help our traders make distinctive, lasting, and substantial improvements in their trading performance and to build a team that attracts, develops, and retains exceptional people.

We believe we will be successful if our traders are successful. Our community of traders, sharing knowledge, trade ideas and experiences, work together as one with a common goal, to make money out of the market. With our support and network, we believe we can help them realize their goals. We are a values-driven company and these values have been established over the past 9 years of operation by our Founder and CEO, Brad Gilbert. They inform both our long-term strategy as a company and the way we serve our traders on a daily basis.

Adhere to the highest professional standards of excellence in teamwork, communication, support, and create an unrivalled environment for exceptional people to perform to their best ability.

We provide an environment that encourages traders to always look for sound reasoning rather than just accept the trades they have been given. Egos are kept in check too and with our flat level of management, the Trading Floor & 247 Trade Zone operate harmoniously. We also know from experience, no two traders are alike, so attention to each individual’s training needs is extremely important to us. No one gets left out!

Our Global Network of Traders

Our 247 Trade Zone has enabled traders from all walks of life, from all over the world to connect, when it’s convenient for them. The level of teamwork, mutual respect, and understanding by all traders are at the very core essence of T4T’s Values and we protect this passionately. With our Team, you can be sure you’ll never be trading alone! 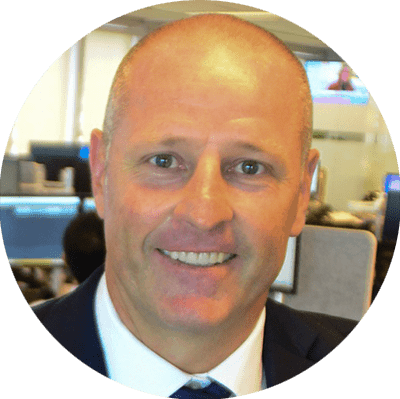 Brad has over 28 years of FX trading experience. Prior to setting up T4T in 2009, Brad worked for Citibank, Commonwealth Bank of Australia and Toronto Dominion Bank. He was Chief FX Dealer of some of the biggest FX teams in Sydney, London & New York. He has also worked extensively through Asia in Japan, Singapore, Hong Kong and Vietnam.

Brad graduated from Sydney University in 1989 and then took up a sporting scholarship (Rugby) at University College Dublin in Ireland the same year. It coincided with the Rugby World Cup in Ireland so he thought there’s no better way to watch the tournament then do it for free. Plus he had a load of mates in the Australian team so it was a great opportunity to hang out with the touring team.

When he returned to Sydney he got a job with Citibank in Sydney on the FX trading desk. Little did he know at the time that this would be his life long career. He didn’t know much at the start but it’s like any apprenticeship,  you get your hands dirty, you learn the ropes from veterans and you simply learn on the job. Brad ended up spending the next 18 years globe-hopping between Sydney, London and New York working for Citibank, Commonwealth Bank of Australia and Toronto Dominion Bank.

Brad spent the first few years taking in all the good traits from the best traders and learning not what to do from the less capable guys. After a couple of years, he was promoted to a senior dealer status and went about making a name for himself. Still, all the while trying to fine-tune his skills: technically and fundamentally. At this stage Brad was grateful he had an economics degree as it did come in handy the deeper he got into the fundamentals.

After a few more years Brad was promoted to Chief FX Dealer and in charge of 20 plus traders. This is where things really got wild whilst managing a team being entertained five nights a week. Brad mentioned

“The challenge of being in charge is you have less time for trading yourself as you’re constantly managing the egomaniacs in the team – which is all of them (me included)”.

The one thing Brad that points to Brad’s success and longevity as a trader in the banks was my willingness to learn every day. He always kept an open mind that he could always learn more and perform better. That knowledge can come from a graduate trainee or one of the other senior traders. So you’re constantly refining your skills and adapting to the market. This keeps you striving and motivated to keep doing what you’re doing in any field for that matter.

Brad founded Traders4Traders in Australia in 2009 and completed the expansion into the USA in 2012. Brad introduced an expansive funded trader program which provides the opportunity for enthusiastic and innovative traders for a full-time trading career with our company.

Brad has an Economics Degree (BEc) & University Blue from the University of Sydney (Australia).

He completed a Rugby Scholarship at University College Dublin (Ireland) with a Masters in Guinness.

He was a licensed & registered Foreign exchange trader with ASIC for 15 years.

He was on the Board of the Australian Foreign Exchange Committee from 2001-2004. (Included 2 RBA reps + 4 traders from the Banks)

He has also completed a Diploma in Financial Planning and is RG146 (ASIC) compliant in Australia.

He was previously a registered Commodity Trading Advisor (CTA) with the National Futures Association (NFA) and has completed the NFA Series 3, 30 and 34 exams.