Euro under pressure as rumblings in Italy emerge

Euro under pressure as rumblings in Italy emerge

Today’s focus turns to the AUD

We had another nice day of trading yesterday with the EURUSD performing a textbook technical trade, rallying to resistance before drifting 100 points lower. If anything we were a little lucky as it appears the main catalyst for the Euro drop was geopolitical rumblings emerging out of Italy. With the EURO under pressure, the Euro drop was attributed to reports that Italy’s anti-establishment 5-Star Movement and anti-immigrant League may ask the European Central Bank to forgive 250 billion euros ($294 billion) of debt. Hahahaha that is so funny!

The rumors seem genuine as EURCHF is moving lower also.

Today the focus will be clearly on the Australian Employment data. The calendar is sparse and this is a ‘dangerous time’ for technical traders. That’s because there’s nothing to ‘lean’ against as such. Traders who run stops at the banks love it when the ‘fundamentals’ disappear, even if it’s only for a day. It’s the one time they get to try and drive the stops. Which is exactly what we’ve seen on GBPUSD a short while ago. Although the catalyst for that move was “geopolitical” – the UK Telegraph newspaper reported, “Britain is prepared to stay in the customs union until 2021”. Which apparently solves a problem with Northern Ireland and that’s supposedly positive!

So focus on the data, but beware potential stop runs. I like the current trends but no economic data for 24 hours makes things a little loose!

Aussie Employment data front and centre. So the AUDUSD & AUD crosses are the main game for Asia. If there’s no variance then just relax and sit it out. We also have the NZ Budget release today. There may be a few ‘fiscal’ surprises to stimulate the NZ economy. So if you have NZD positions definitely keep an eye on it!

With the Euro under pressure and with no major economic data releases scheduled I have a feeling this is going to turn into a geopolitical sh*t fight. This gives the media to focus on the Italian ‘story’ and that’s just smelly. But the news is all bad from what I can gather so selling Euro on rallies is still the way to go, for now! If the Italian rumors are just that, rumors. Then we may see EURUSD rally. Stranger things have happened. Also, we should expect the UK Brexit news to spread like wildfire as it gives GBP longs something to sing about.

Beware getting long though as everything in the UK has gone cold, not just the weather!

We have a pretty mellow session coming up. We have the weekly jobless data & Philly Fed index and that’s it. Keep an eye on the US Treasury yields, where the 10 Year’s have rallied through 3.10%. Something has to give: Either the Treasuries will come off or the USD will catch up……. we could see the USD go for another run to the topside if it’s the latter. 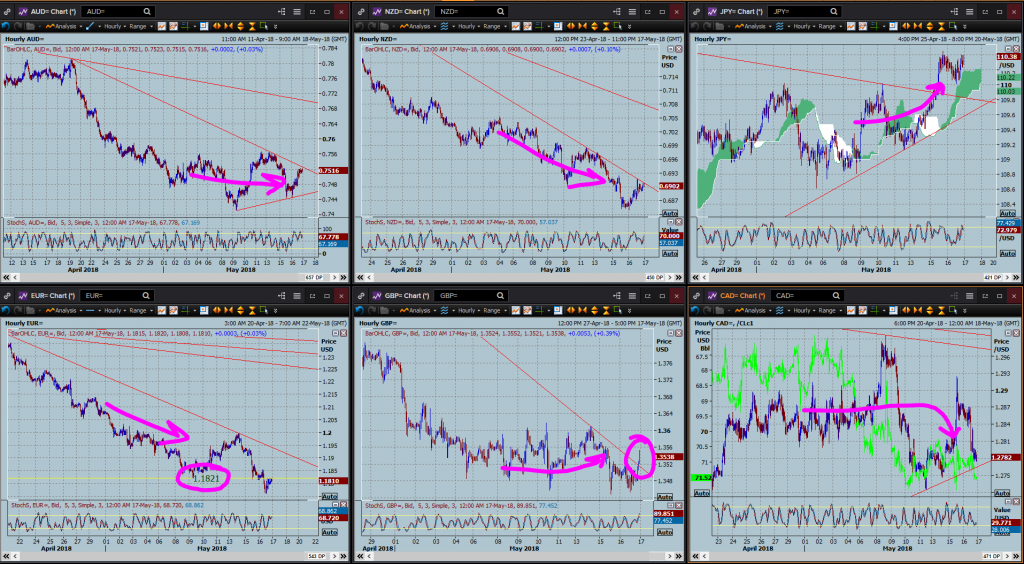 Check our Daily Analysis for detailed analysis of the Major currency pairs.

The idea of our “Market Insight” is to give you some guidance with your daily preparation. Your Daily Analysis needs to become habitual – For full guidance on our daily routine click here.