Forex Fundamental Analysis provides the additional information to Technical Analysis to give the forex trader a full understanding of the Forex Market – hence the importance of fundamentals.

The forex traders’ job is to determine the direction of a particular currency, then to decide which currency pair to buy or sell. To identify this, it is important to understand the ‘Cause and Effect’ of the Forex Market. The ‘Cause’ can be found in the fundamental economics of a particular country and the actions of the central banks to manage that economy. The ‘Effect’ is the subsequent reaction of the traders to this information in the form of buying or selling that can be found on the charts i.e technical analysis. So using both Fundamental Analysis Plus Technical Analysis gives the forex trader an edge. If the US Dollar economy was weak and the European economy was strong then the trader would look to buy the EURUSD and use Technical Analysis to find the key entry points into the trade.

Whilst it is not crucial to have an economics degree, it is important to understand the basics. When a country has a good economic outlook or its economy is currently strong the currency is most likely to increase in value. In the forex market we trade in currency pairs so it is vital to understand that we are comparing the relative strength of one economy against another i.e If the US Economy was strong and European economy was weak, then we could expect the EURUSD to have a downwards trend.

How does a country economy work?

Yes you might need an economics degree to fully grasp this, however we are lucky as forex traders we just need to know if an economy is strong or weak relative to another and what economic data dictates a strong or weak economy.

How is an economy managed?

Contrary to popular belief the economy is not managed by the government of that country, it is managed by its central bank, which is not influenced by government. The Central Banks have objectives and they are generally:

Each country may have specific objectives, however each Central Bank has its own ‘Monetary Policy’ that shows everyone in a transparent way how that bank is going to achieve its objectives in the economy. A Central bank will also have a ‘Fiscal Policy’ that controls the money flow within that economy.

The metrics and tools that the Central Bank have to manage the economy?

Let’s take a look at the major metrics (as found in the formulae at the beginning of this article) of an economy:

Released quarterly, this is the most important indicator of economic health and growth and is a Tier 1 Economic Data Release (ie any variance on the forecast will create a large change in price). It is the total amount of goods and services produced.

Released quarterly, this is the second most important metric and is also a Tier 1 Economic Data Release. It is a measurement of prices for a range of consumer goods and a good measurement of inflation.

Released monthly, this data release is monitored closely by traders as it may give an indication of what is to come in the next CPI as that is only released quarterly. The Retail Sales metric tracks the dollar value of merchandise sold within the retail trade.

Central banks use a ‘Monetary Policy’ that outlines the objectives of the Central Bank and how they are going to manage their particular country’s objectives. Basically there are two types of Monetary Policy, known as ‘Expansionary’ and ‘Contractionary’. If a Central Bank wants to reduce unemployment, boost private sector borrowing and consumer spending, and stimulate economic growth they ‘increase money flow and is referred to as an Expansionary Policy’. If they want to control an increasing inflation rate then they reduce the money flow rate to slow the economy growth rate down, increase unemployment and put the brake on borrowing and spending by businesses and consumers, this is referred to as a Contractionary Policy.

How an Economy works

A country’s economy is a dynamic and constantly changing cycle of events. Those events are:

The economy is managed by the Central Bank of that country and they have essentially one tool to manage it – Interest Rates. 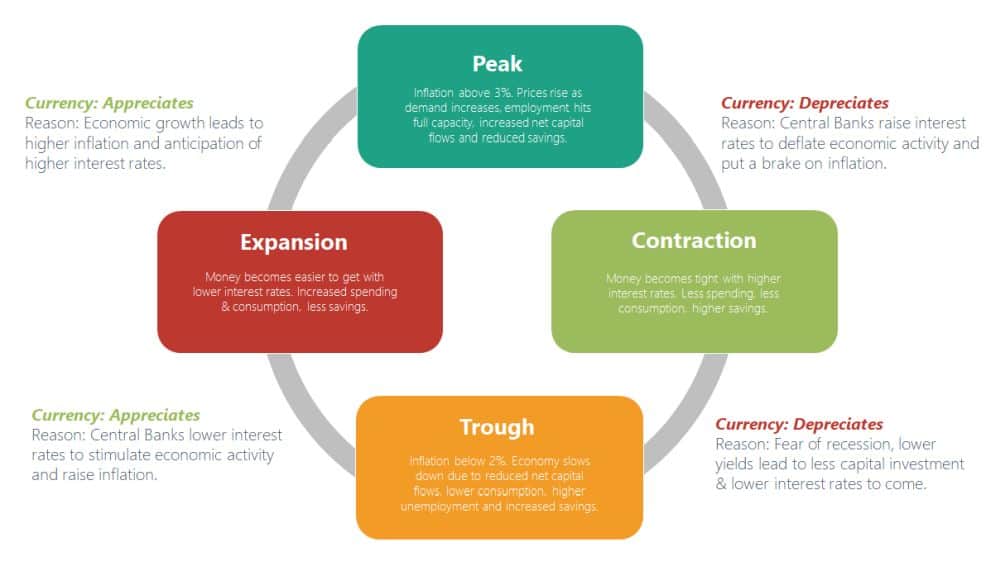 At the core of Forex Fundamentals are each of the Central Banks have specific problems and objectives that are specific to their country. If we know what those problems and objectives are then we can predict the effect on the currency when an important economic data metric is released. The Central Banks make this very clear and transparent in their ‘Monetary Policy’. They want traders to know what they are doing so they can control the value of their currency.

Let’s take a look at the most important one the US Federal Reserve often called the ‘Fed’.

The Fed has three goals specified by congress (government)

Read more about Conducting Monetary Policy from the Fed.

The FED is clearly focusing on maximum employment and returning inflation back to 2% from 1.7% so from the information above the important economic data releases in the next few weeks would be Inflationary and employment figures which would include:

Any large variances from the predictions will cause a large movement.

Can you see why Forex Fundamentals 101 are the cause of the currency direction in the forex market, and why other Forex Educators on the internet steer well clear of fundamentals.

Trade with the Market, Not Against it! Ever since I started as a Junior trader (fresh out of university) with Citibank I was trained to…

There are 54 Million people in the US with a 401K retirement fund of varying sizes, however unbelievably there are 96 Million people that do not have one at all.