How to manage positions sitting out of the cash

How to manage positions sitting out of the cash

One of the key skills a trader needs to adopt and/or develop is the ability to have an objective view of what’s going in the market, especially when you have a live position open, but out of the cash.

I have always said you’re at your best when you don’t have any positions open. That’s because your viewpoint is completely objective. But once your position goes live, your view generally becomes subjective and that’s where things can get blurry and you can end up fooling yourself you’re going to be OK when the real course of action should be to cut the losing trade out and start again.

This is the number one reason why Economists & Analysts at ‘all of the banks’ are not allowed to run positions themselves. Sure they can call the market and understand the economics and technicals but once they take a position their neutral viewpoint goes out the window. They start seeing things to support their view and that can often be against what is really happening in the market.

Having losing trades is a part of trading, but you can be pro-active managing your losing positions

What I’m talking about is managing a position that is still open but out of the cash. You’re currently staring at a red number and that can be uncomfortable.

This is where Professional traders step in and simply ‘re-analyze’ the market objectively.

The first thing you need to do is see why the currency pair moved, what was the main driver?

Answering this question objectively is important because it will tell you how to manage the trade from here.

If the general economic data or central bank sentiment has moved against your position then all you’re doing is nursing a bad position.

This creates anxiety and usually stops you from attacking the market for other potential opportunities. So instead of sitting back and taking the pain, take control and look at your alternatives.

Generally speaking, you’re looking to get out at Breakeven or thereabouts. If you’ve got the ‘correct’ entry position then you usually have 2-3 chances to get out before the position goes south.

By looking at stochastics you can clearly see if it has a chance to bounce or not.

Say for example you are caught Long GBPUSD and it’s moved lower through your entry level.

If it’s oversold then you’re in with a shot at getting out at breakeven or even for a small loss or profit.

So the smart thing to do would be to set an alert on your platform at your entry level or come back and check the market in 2-3 hours and see where it is. Just give it a chance to bounce.

If it’s overbought then you’re in trouble and I’d just cut the position especially if it was just 10-15 points out of the cash.

That’s because traders starting their day will see the overbought setup and have general inclination to sell straight away, pushing the currency pair lower.

If it’s mid-range you’re at the mercy of the market and once again I’d be more inclined to cut half the position and run the balance.

This is a pretty normal occurrence and should be recognized as such. There’s no need to panic or second guess the position.

As long as you got into the trade for the right reasons (Technical or Fundamental or both) & they haven’t changed then you should just ride it out.

There’s no need to over-manage these positions in this scenario.

Of course, you can once again utilize stochastics to manage the position but the fact there has been no ‘fundamental shift’ the currency pair should (in most circumstances) bounce back into the range.

So for me, I wouldn’t over manage this position. I’d let it play itself out. I certainly would check the market in 3-4 hours and see how it’s going but outside of that, it’s an ongoing position.

What about if there is upcoming data that could influence the outcome?

If there is major data coming out then you really have no choice but to close out the position.

If you keep the position open you’ve now gone from trading to gambling, and that’s very uncool!

I would close the position out and take a loss straight up and then look to get back into the position if the data went my way. It’s as simple as that!

I decided to get into the trade early just above an old resistance trendline that turned into support, instead of utilizing the rising trendline below which in hindsight, the lower level would have been the best. 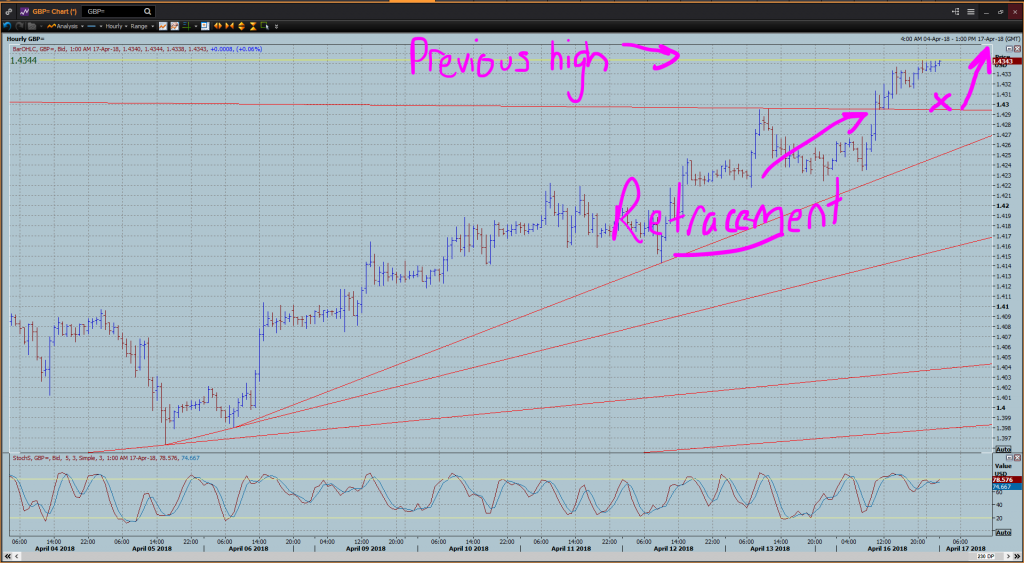 GBPUSD move lower down to test support on the back of a fundamental shift. The UK data came in lower than expected.

So I’ve gone against the general fundamental sentiment even though it fits in with the technical sentiment. 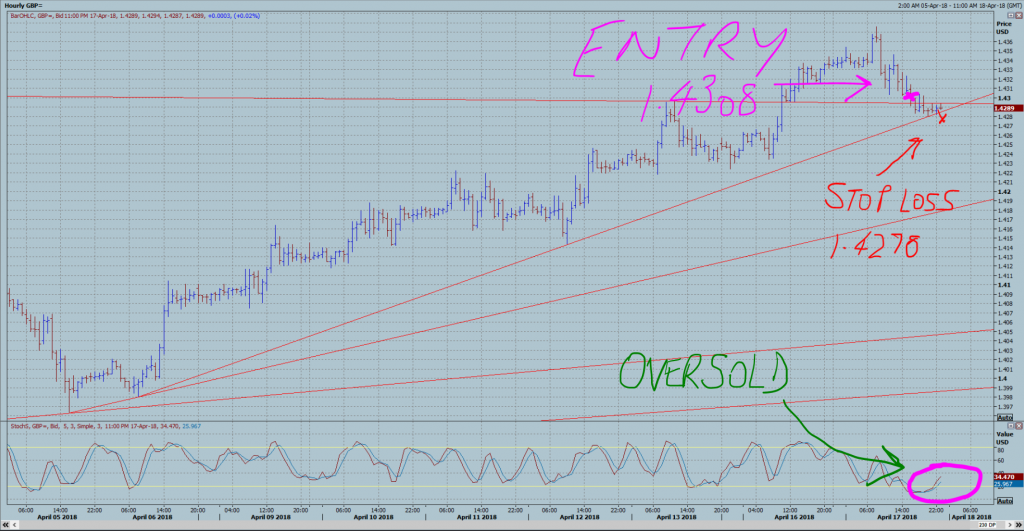 So now I’m nursing a position that is out of the cash. It’s time to fully re-analyze GBPUSD.

So we’ve had a general shift in Fundamentals which is putting massive pressure on the support trendline. That Fundamental shift will have traders salivating at the prospect of pushing GBPUSD lower so we need to look to manage the trade and try and get out with as little damage to the account as possible. 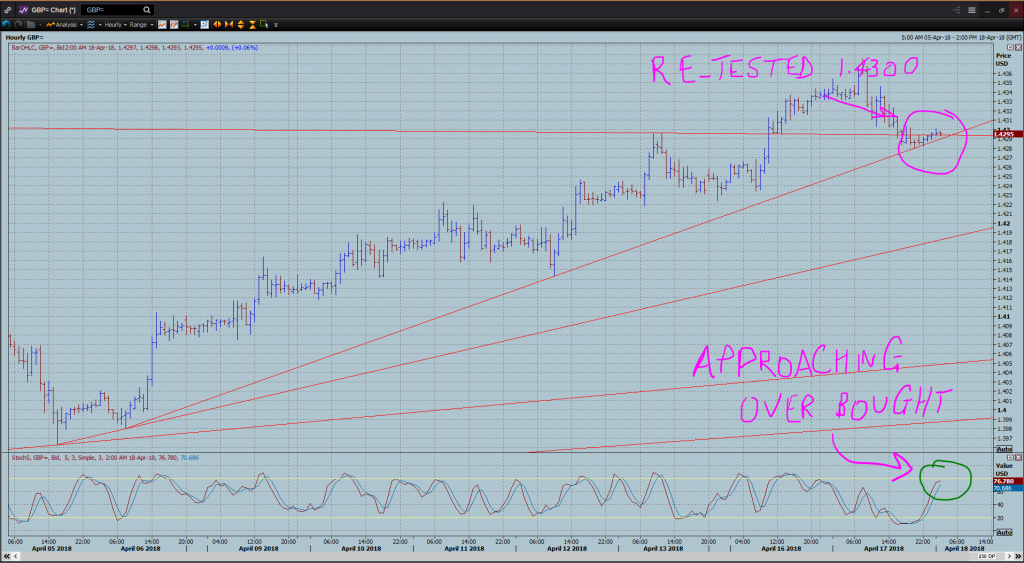 Because GBPUSD stochastics were oversold I was happy to give it a chance to bounce all the time knowing there is no real chance for it to bounce towards my take profit.

The objective at this point is to get out at breakeven or thereabouts.

I waited for it to re-test 1.4300 and above. Mainly watching stochastics and trying to time my exit with it turning down again.

But once it had hit 1.4300 it started drifting lower and that’s when I decided to exit the trade locking in a 12 point loss.

What does managing the position do for me?

Deciding to cut the loss has done a number of positive things for me.

First, it has potentially saved me some cash as I’ve taken a 12 point loss instead of the 30 initially planned.

Second, It gives me back ownership and control of the position. It actually empowers you knowing that you have pro-actively managed the trade. Psychologically this is very important.

Third, it frees me up to look for the ‘next best trade’.

Sure when it’s all said and done (in hindsight) we’ll know what the correct thing to do was. But being a professional trader requires decision making, good or bad.

There will, of course, be situations where this trade goes back into the cash and you can beat yourself up, but the majority of times if you objectively re-assess the currency pair, you’ll know exactly what should be done.

On the majority, I find my decision making correct, and I’d say my management of open positions (that are out of the cash) has resulted in 75% of my losing trades being exited at much better levels than they otherwise would have.

This in the long term adds up and overall keeps you in the game ahead of your drawdown limits.

Don’t fall into the trap of managing every losing position

Remember you have to be completely objective with your analysis. It’s very easy to start managing every trade you have & that’s a massive mistake.

Identify the trading scenario, answer the key question as to ‘why’ it is where it is, and then fully re-assess your position.

By doing so you are taking control of your trading and one step closer to become a full-time Pro!

I hope this article helps with your trading. If you have any questions about this article, by all means, respond in the section below and I’ll answer your questions as soon as I can.