The Republican-controlled U.S. House of Representatives approved sweeping, debt-financed tax legislation on Tuesday, sending the bill to the Senate, where lawmakers were due to take up the package later in the evening.

The biggest overhaul of the U.S. tax system in more than 30 years could be signed into law by President Donald Trump as soon as Wednesday, if both chambers of Congress approve it.

The bill passed the House by a vote of 227-203, overcoming united opposition from Democrats and 12 Republicans who voted against it.

Passage was all but certain in the Republican-controlled Senate, as well.

The plan includes steep tax cuts for corporations and wealthy taxpayers, as well as temporary tax cuts for some individuals and families. It repeals a section of the Obamacare health system and allows oil drilling in Alaska’s Arctic National Wildlife Refuge, just two of many narrow changes added onto the bill to secure sufficient to win its passage.

Republicans insist the package will boost the economy and job growth. They also see the measure as key to retaining their majorities in the House and Senate in elections next November.

Democrats say the bill will deepen the income gap between rich and poor Americans, while adding $1.5 trillion over the next 10 years to the mounting $20 trillion U.S. national debt.

Key points to focus on:

It appears traders are somewhat devided on the overall impact the US tax reform will have.

Stock markets around the world surged this week on U.S. tax cut hopes, but the USD has remained muted. Traders believe most of the positive impact of the cuts to corporate taxes have already been priced in, while expectations the overhaul would trigger a wave of repatriated dollars were overplayed.

Only time will tell and the majors have been patiently trading sideways in tight ranges in the lead up to the approval of the tax reforms.

The majors continue to trade within recent ranges. It’s interesting to note the mixed reaction of the USD across the majors. 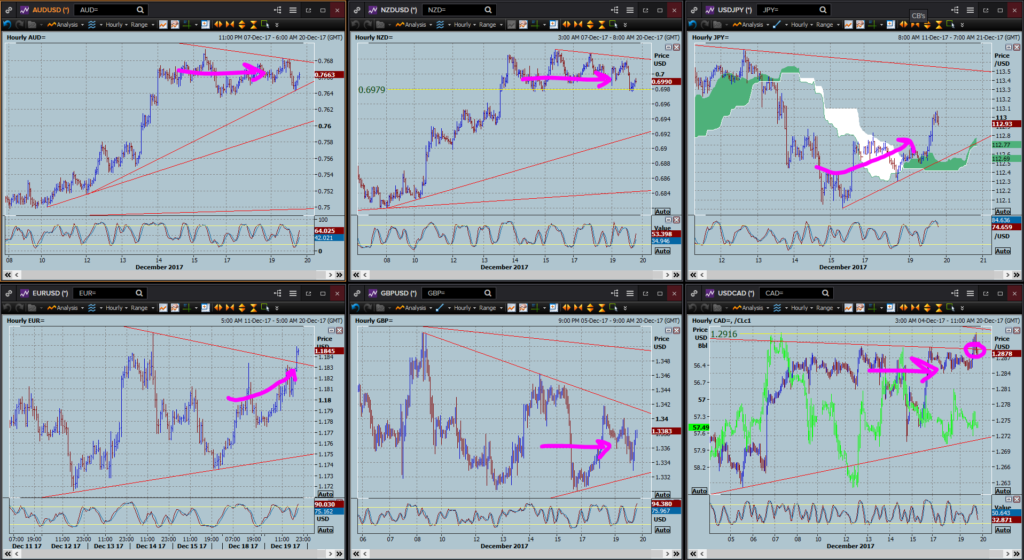 Sideways at the moment. Direction will come from the USD as there is no Aussie data this week.

Sideways at the moment. We have Current Account data today & GDP data tomorrow to focus on.

Starting to edge higher as the US tax bill nears final approval.

Slightly higher despite weaker Eurozone data. Looks like a short squeeze in the lead up to the final approval of the US tax bill.

Continues to chop about within recent ranges as Brexit talks near.

Largely rangebound ahead of the USD tax bill final approval.

Few stops triggered above 1.2900 but straight back into the range. Focus is on the US tax bill approval.

Well we could have a final decision from US Congress on the US tax reforms today. Voting should start in the coming hours and it’s largely expected to get through.

What to do with the USD?

I’m still thinking it’s going to be USD positive although the move may be somewhat smaller than anticipated as it’s largely been factored in and the increase in US debt from the reforms is somewhat disturbing.

The majors aren’t giving too much away yet. Focus on the pairs with good trendlines.

One of the problems is we have no solid directional pairs at the moment. So picking the move is a little tricky.

I’m going with USD strength on the outset and see how it goes from there.

Once again it’s worth keep an eye on the NZD first thing today but the overall focus for the whole market will be the final approval of the US tax reforms.

If anything it’s a major geopolitical hurdle taken care of and that’s a good thing for trading going forward.

So even if we don’t get much activity out of it straight away, trading will be better for it going forward. 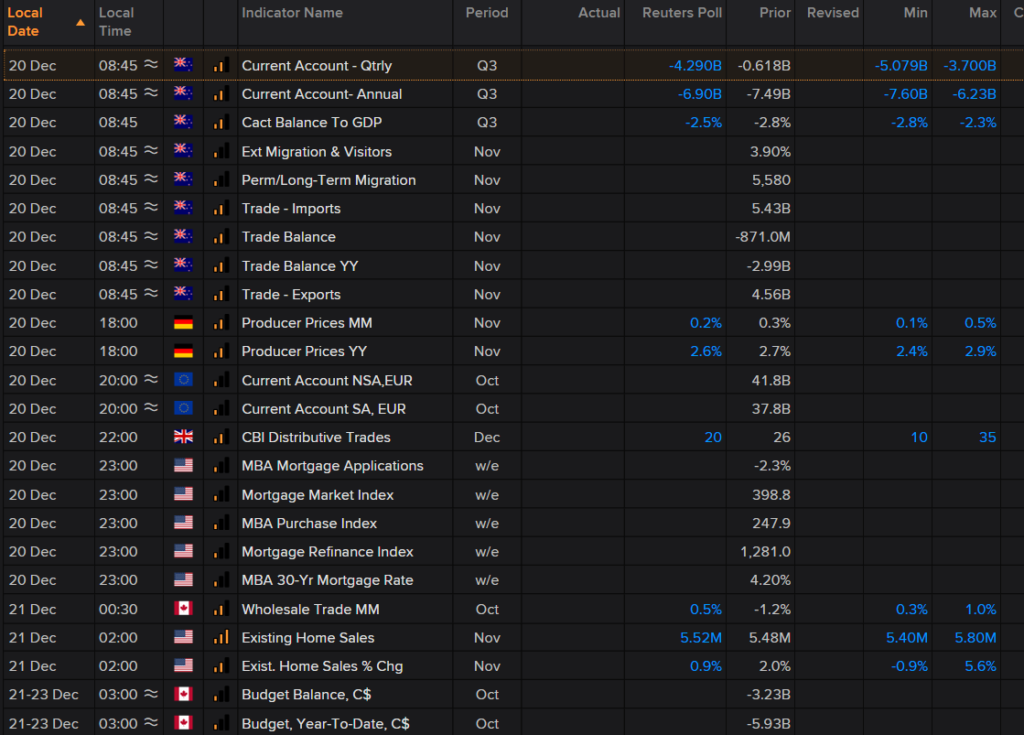 Potential Strategy: The Kiwi has been trading sideways so the movement will come from the data. Trade with it. 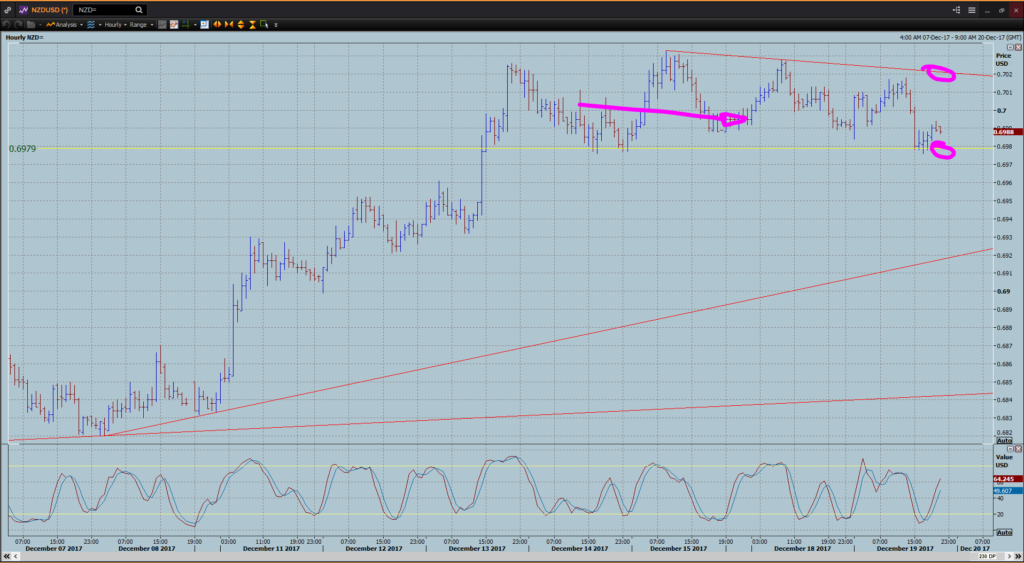 Potential Strategy: I think it will be USD positive. Trade at market or let it gather momentum and trade on a break above 113.55. 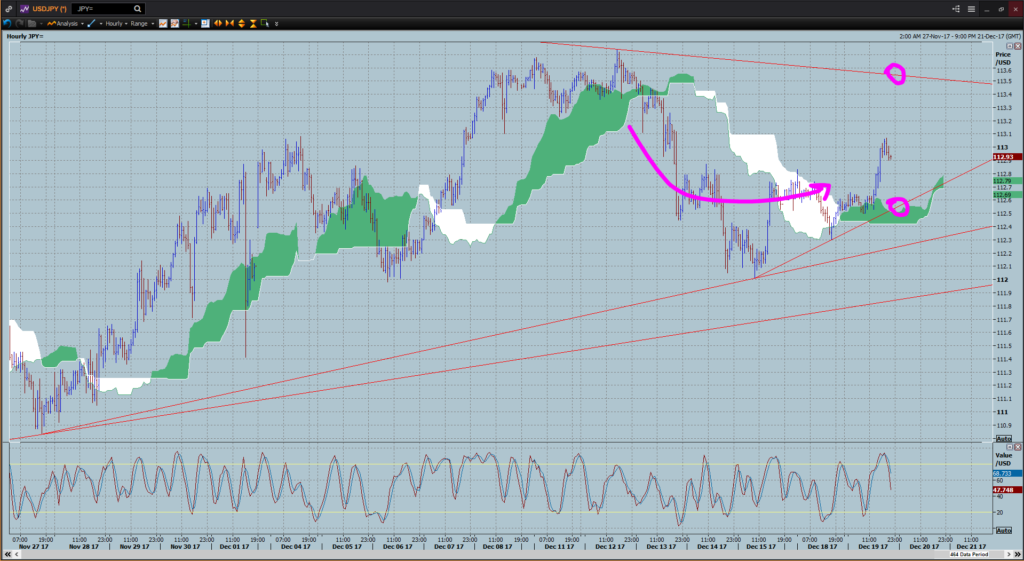 Join us for the 4th of a 5 part Series on: How do Bankers trade forex?

Part 4: Where are you supposed enter the market? I’ll run you through the way the bankers read their charts.

In the fourth part of this 5 part series we look specifically at entry levels – Technical Analysis.

This is the most misinterpreted component of trading. Of course you can get in anywhere but how about reducing your risk and increasing the probability of success. That’s a good idea don’t you think?

That’s because most retail traders get their knowledge from ‘Google’ or from unregulated inexperienced goons hoaxing as ‘experts’!

Technical analysis is not about shoving as many Indicators on your charts that you can find….far from it.