The USD slipped to a four-day low against the Euro and was generally softer against most other major currencies, as its rebound after last week’s weakness ran out of steam and month-end adjustments created selling pressure.

The Euro rose 0.65% against the greenback to 1.1931 after earlier falling to 1.1809 on the back of weaker then expected German retail sales & Eurozone inflation data.

The month end fix was exerting selling pressure on the USD as market participants adjusted currency hedges for their portfolios. It’s been awhile since the equity markets moved so far and that’s likely caught a lot of traders off guard.

Concerns about the progress of U.S. tax overhaul legislation also weighed on the dollar as there still appears to be a large opposition to the bill.

The Republican drive to push sweeping tax legislation through the U.S. Senate was hurtling toward a dramatic conclusion, as Republican leaders pursued behind-the-scenes deals intended to secure enough votes for passage.

Republican U.S. Senator Susan Collins said on Thursday she was not committed to voting for the Senate tax bill, citing concerns over healthcare and a deduction for state and local taxes.

Senate Majority Leader Mitch McConnell, however, said he is optimistic about getting enough Republican votes to pass the bill.

The number of Americans filing for unemployment benefits fell for a second straight week as labor market conditions tightened further.

U.S. consumer spending slowed in October, however, as the hurricane-related boost to vehicle purchases faded.

Underlying price pressures pushed higher for a second straight month, suggesting a recent disinflationary trend has run its course and bolstering expectations that the Fed will raise rates next month.

Most believe core inflation will probably remain subdued for a few more months from the impact of the two hurricanes that hit the US, but most Fed officials believe this weakness to be transitory and the Fed still looks set to raise rates in December.

The British pound strengthened on hopes Britain is close to a deal with the European Union over the Northern Ireland border. Sterling was up 1% at one stage printing a high of 1.3548.

The EU has named the border as one of three issues on which “sufficient progress” must be made before talks can move to negotiations on Britain’s future trade relationship with the bloc.

The CAD continued to trade in volatile ranges getting pushed around by economic data and fluctuating Oil prices. It spiked down from 1.2900 to 1.2846 after data revealed Canada’s current account deficit swelled to C$19.35 billion, the third largest in history, only to bounce back and close around 1.2910 as Oil prices fell again. It’s a nasty bit of gear at the moment.

We have another decent day of economic data scheduled starting with the Kiwi Terms of trade. The Kiwi has been a solid performer on economic data of late so keep an eye on the flightless bird.

But the major focus will of course be the CAD with key GDP and Unemployment data scheduled. 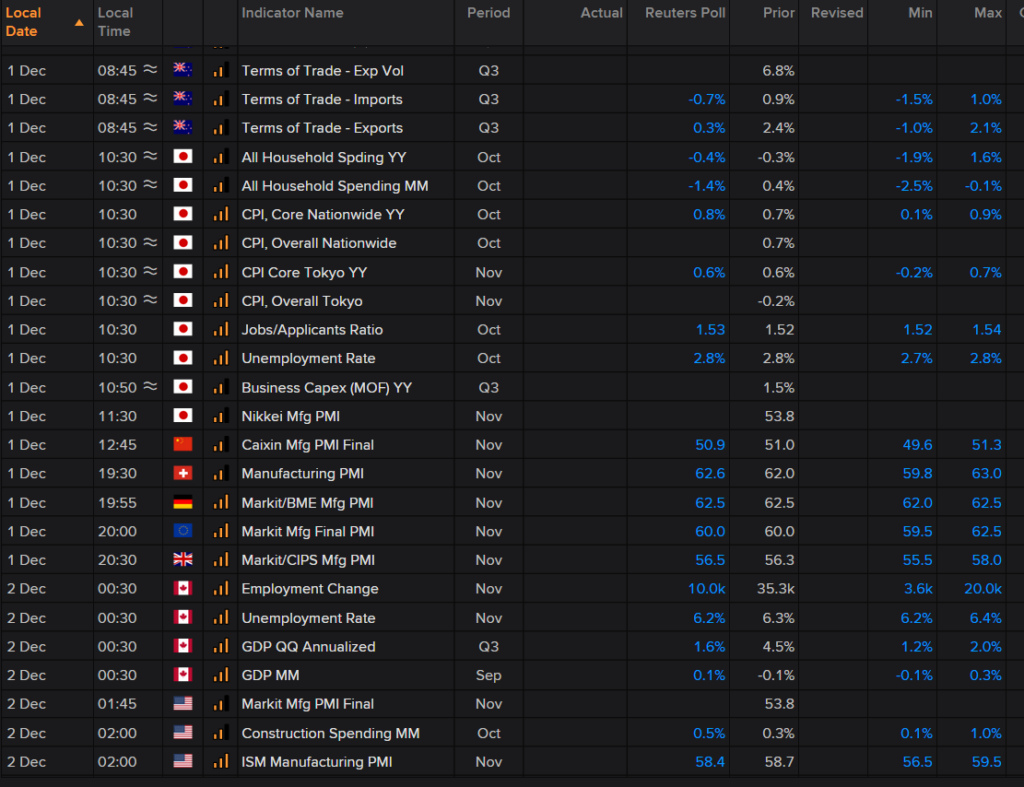 The AUD, NZD & EUR continue to chop about with mixed impact from various data releases whilst the YEN & CAD drift lower against the USD. Sterling is the clear stand-out driving higher as continued positive news from Brexit hit home. 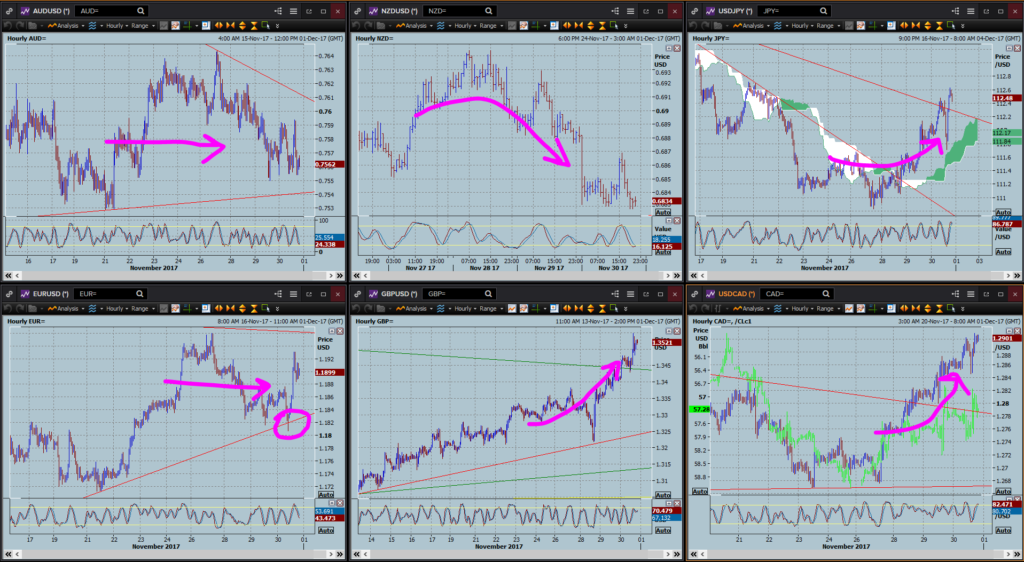 Very lame! The data just hasn’t been that helpful so it just whips about it tight ranges. Watch the USD for direction.

Extremely weak tier 1 Business outlook data has the Kiwi on the back foot. It’s volatile but reacting well to data so watch out for today’s Terms of trade data.

Slowly climbing higher with the odd spike from economic data releases. Tough trade above the cloud.

The data out of Europe has been weak but month end flows see it close higher. It’s back in the range again. US data is domianting so watch today’s ISM Manufacturing PMI data.

Brexit, Brexit, Brexit ….. we’re over due some bad news aren’t we? This run is ridiculous and random…beware it’s nasty at the moment.

Not a lot to see here as it continues to trade sideways in tight ranges.

Potential Strategy: The CAD could go either way. If the data lines up all positive or all weak, you’ve got to trade with it. 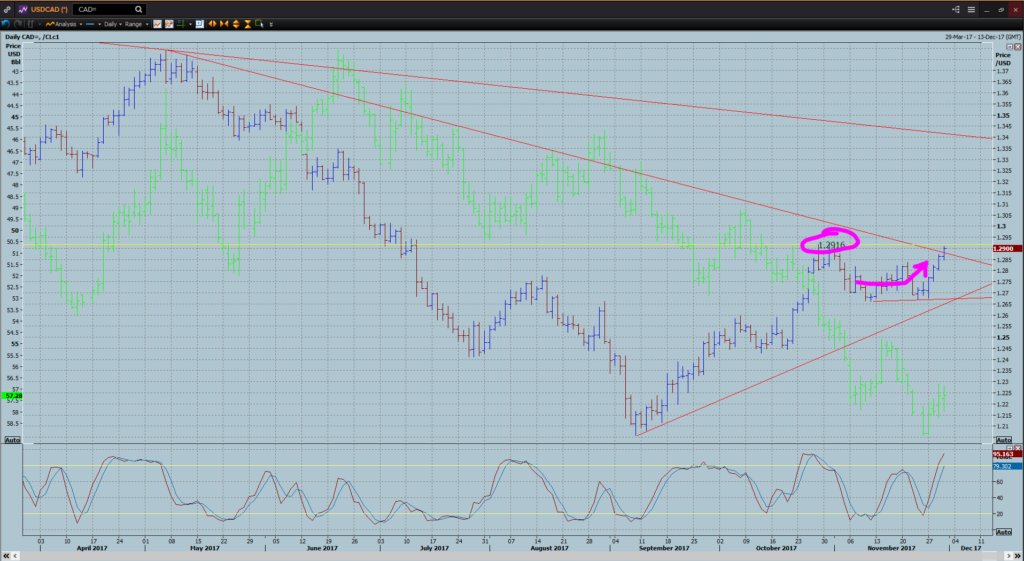 Ok team it’s been a challenging week I know with very few ‘clean’ opportunities. But now’s not the time to play catch up.

Be patient and wait for the opportunity. Today we have a cracking opportunity on the CAD.

We’ve got key data and the currency is in the middle of nowhere so it could react really well to variant data.

But beofre you launch in head first just remember there are 2 variables to the release. So make sure they are aligned before you trade.

Easier said then done I know…. but you know what I mean.

It’s the start of a fresh month with new possibilities.