Today’s focus turns to the EUR & the ECB Meeting

The USD index hit a four-month high of 91.26 on Wednesday, boosted by the benchmark U.S. Treasury yield, which continued its rise after breaking through 3% on Tuesday for the first time in four years.

That has caused U.S.-Japan and U.S.-German yield differentials to widen further in the dollar’s favor, leaving the Yen and the Euro lower.

The market is coming to the realization that U.S. growth is actually good. And Q1 data is probably not going to be as bad as some of the pessimists expected.

U.S. first-quarter gross domestic product data due on Friday could determine whether the dollar extends its gains.

The USD index rose as high as 91.26 in New York trade, its strongest level since Jan. 12. The USD gains drove the Euro down past the two-month low hit on Tuesday because of concerns that firmer U.S. yields would reduce demand for the region’s bonds at a time when hedge funds have amassed record long euro bets.

Traders focus now turns to the European Central Bank’s pace of planned rate hikes & reduction of their QE program. Don’t forget in early 2018 traders bet that synchronized global growth would force the ECB to accelerate monetary policy normalization. But weak data suggests there will be no change to interest rates announced at the end of the central bank’s meeting on Thursday.

So we could be in for a bumpy ride & it’s all going to come down to the ECB announcements.

On top of that, we have US Durable Goods data scheduled for release at the same time Draghi is due to release the policy statement & press conference.

I think the market is prepared for a disappointing ECB result but that won’t stop it moving aggressively after the announcements.

The focus will be on the JPY and JPY crosses but with little data to work with it’s a tricky trade.

We do have some third tier Aussie data but I can’t see that having too much impact ahead of the ECB later today.

Just be careful with the JPY crosses as this whole move is a ‘USD move’ so the crosses aren’t exactly running a clear path up or down.

All traders will be focusing on the ECB Interest Rate Decision. No changes in rates are expected but the market is expecting some forward guidance on rates and QE adjustments.

Beware ambiguity from the ECB, which is commonplace in central bank statements & press conferences.  This is not such an easy trade so focus on current downside momentum and any technical levels you may find.

The EURUSD & EUR Crosses will be the main game for the European session.

USD direction in the North American session is currently coming from the US Treasuries, so make sure you keep an eye on what’s going on with them.

If you have Reuters Xenith type in code US10YT=RR to get the current levels and if you don’t have Reuter’s jump onto Trading View.

It’s the yield that traders are focusing on. If it continues to rally above 3% (current level 3.0315%) then the USD index should keep going higher. If it drops below 3% then the USD should fall.

We also have US Durable Goods due for release as well at the start of the US session but that may be overlooked because of the ECB Press conference which starts at the same time.

I’d expect traders to react to the US data & then react to the ECB after that. So the market could be loopy as the various events roll out.

This is definitely no time to increase your trade size as volatility will be at an extreme level.

The major currency pairs are correlating perfectly. If there is no change from the ECB OR if they are neutral/dovish then we should see the USD explode higher.

Just remember, the Trend is your Friend! 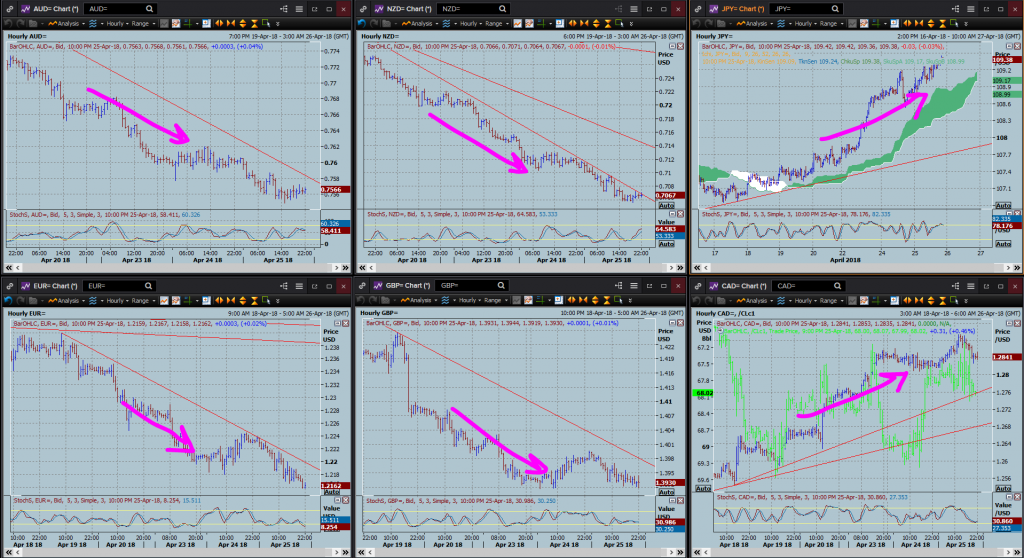 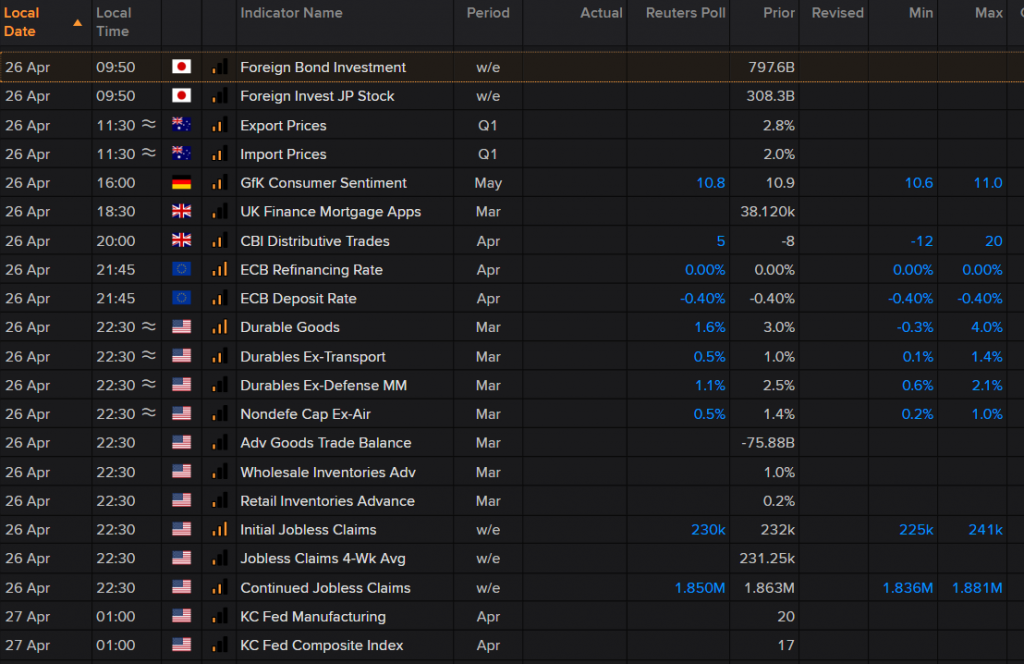 The idea of our “Market Insight” is to give you some guidance with your daily preparation.

Your Daily Analysis needs to become habitual – For full guidance on our daily routine click here.