The USD Index rose to almost one-month highs on Tuesday as the Federal Reserve began a two-day policy meeting where it is widely expected to raise interest rates for the fifth time since 2015.

Traders will be watching for any signals that Fed officials are more optimistic on the prospect of faster growth as lawmakers appear close to passing a large overhaul of the tax code for clues on how many further rate increases are likely next year.

Traders will also be watching the Fed’s statement at the conclusion of the meeting on Wednesday for concern about tepid inflation.

U.S. producer price data on Tuesday showed an increase in wholesale inflation, increasing hopes that price pressures may be rising from sluggish levels.

Consumer Price Index (CPI) data on Wednesday will be a key data focus for further clues on price pressures.

Sterling continues to be a trading mine field after another hectic day of trading.

The Pound only got a temporary boost from stronger UK inflation data which unexpectedly nearly hit a six-year high in November, with traders thinking it would have little effect on how soon the Bank of England would raise interest rates again.

UK CPI hit an annual rate of 3.1% in November, the data showed, above economists’ average expectations in a Reuters poll for another 3.0% rise.

As that is more than a percentage point above the BoE’s 2% target, Governor Mark Carney will have to write a letter to finance minister Philip Hammond to explain what the BoE is doing in response.

But because one of the main reasons behind the surge in inflation has been the pound’s plunge since last June’s vote for Brexit – about 12% on a trade-weighted basis the BoE has said it expects it to fall slowly over the next three years to just above 2% as sterling steadies.

The pound climbed to the day’s high 1.3380 after the data, but later slipped to 1.3302 as the dollar strengthened ahead of Wednesday’s expected U.S. interest rate hike, leaving sterling down 0.2% on the day.

The majors are pretty much on hold ahead of the FOMC announcement later today.

But there’s always plenty of potential after the event. 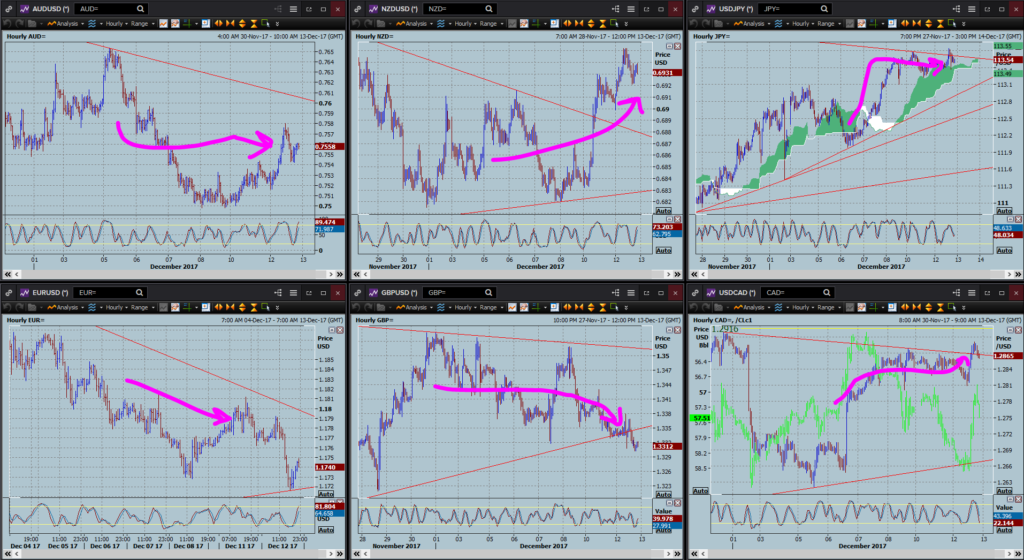 Short squeeze yesterday leaves the Aussie trading mid-range. I still like it lower and will be looking to sell on rallies.

The flightless bird has everyone confused. Overall it’s a downtrend but short term it’s just banging away in the mid 0.69’s.

The Beast is bit of a tease at the moment. Waiting for FOMC for next trade.

Trading in a gorgeous little downtrend at the moment. Focus turns to FOMC & ECB meetings.

Strong CPI & it’s lower… that’s got to tell you something. I reckon we’re not far away from a massive sell-off. Watch Brexit updates!

Continues to grind away consolidating at curent levels waiting for the USD to make up it’s mind.

Oil appears to be dominating. Sideways as we await the FOMC for next leg of USD direction.

It’s always a tricky scenario leading into the FOMC announcement. The best thing to do is focus on what we do know and leave the uncertainties to someone else.

First up we have the UK Claimant count change, unemployment rate and average earnings. Now this is a heavy hitting treble that has the potential to really give Sterling a shake.

But what do we know at the moment?

Sterling is a nightmare to trade as direction is constantly being influenced by random Brexit updates. Also we have the BOE meeting on Thursday which gives BOE Gov Carney another chance to express his view that rates aren’t going anywhere in a hurry…despite inflation data to the contrary.

The other important fact was yesterday’s trading activity. We had stronger inflation data which saw GBPUSD rally 20 points and then drop 70. Now that’s a sure sign something is amiss.

So I’ll be keeping a close eye on the UK Employment data but I won’t be looking to get involved with too much capital at risk. Maybe 0.25/0.5 my normal trade size.

This always creates a conundrum when major data is released hours ahead of the FOMC…. does the FED know what the data is before they go into lock down for their meeting?

The CPI data is extremely important because that’s all the FED has been talking about for the past few months. But don’t forget a lot of recent data has been getting brushed aside as ‘Hurricane effected’ – so maybe the CPI is less important this time round.

In any case I think we’ll see a muted move unless there is massive variance in the M/M data (0.4% expected) as most traders prefer to wait for the premier event for the main trade.

The FED – they are expected to raise rates again….. its pretty much fully factored in. The FED has been on a solid ‘consistent’ path and I’m sure Janet Yellen wants to complete her plan as she holds her last Press Conference as the FED Chair.

So where’s the trade if it’s fully factored in?

OK the MAJOR RISK is ‘they don’t raise rates’…..if that were to occur we would see a huge USD move to the downside. So it might be worth placing a cheeky stop entry on the downside 30 points from the current market.

It’s a very low chance of it happening but it’s easy to cover the event risk.

Why 30 points away? Well if they don’t raise rates I think we’d get a 250 point move to the downside so 30 pips away is to avoid the ‘noise’ around the release and still gets us in with plenty of potential cash on the table.

If the FED raises rates…. it’s all going to come down to the tone of their Statement & Janet’s comments in the Press Conference. A bullish tone and the USD should continue to the topside albeit in a nice orderly fashion.

If they were to signal that rate moves are done for now…then we’ll see a quick blip up and then quick retracement lower. After all, the market is factoring in 2 – 3 more rate hikes next year.

So a rate hike plus gentle bullish tone is business as normal and the USD should maintain current levels or if anything slowly grind higher.

Remember: Sometimes the best trade is 2-3 hours after the FED announcement when the dust has had time to settle. So don’t rush it and put yourself out to make the release.

That’s pretty much it. The Asian session is your downtime, so don’t waste too much time in front of the screens.

The European session will be reasonably busy with UK and Eurozone data to trade and then we kick off with the multi release North American session.

Its action stations for sure!

Trading actvity will really start in Europe and then run right through the North American session. 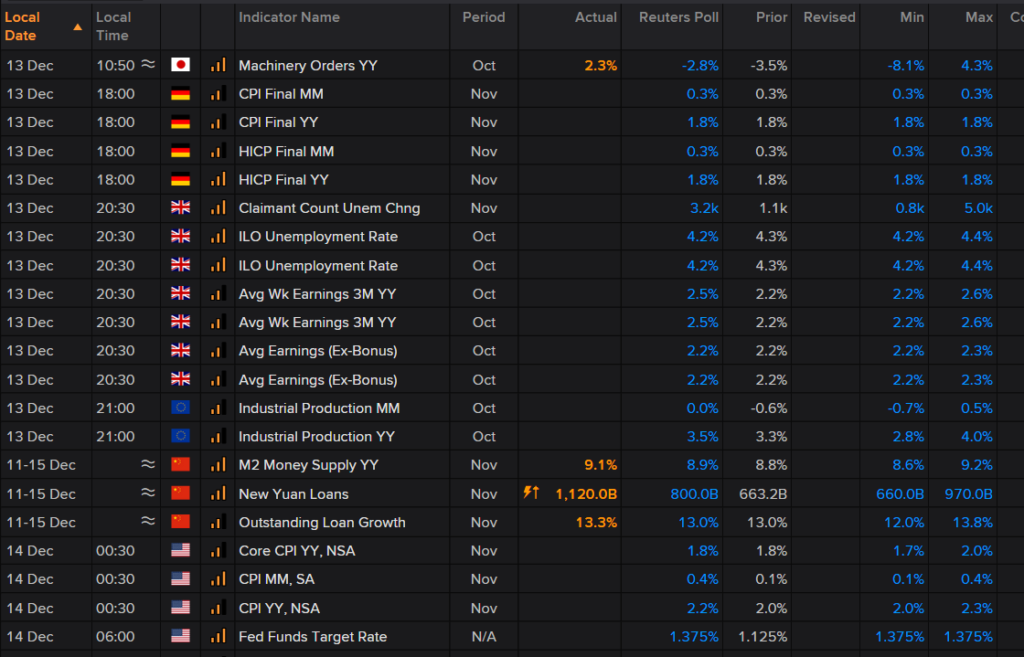 Potential Strategy: Momentum is up…. so I’ll be looking to get long above 113.73 once we get confirmation the FED are on track to raise rates 2-3 times next year. 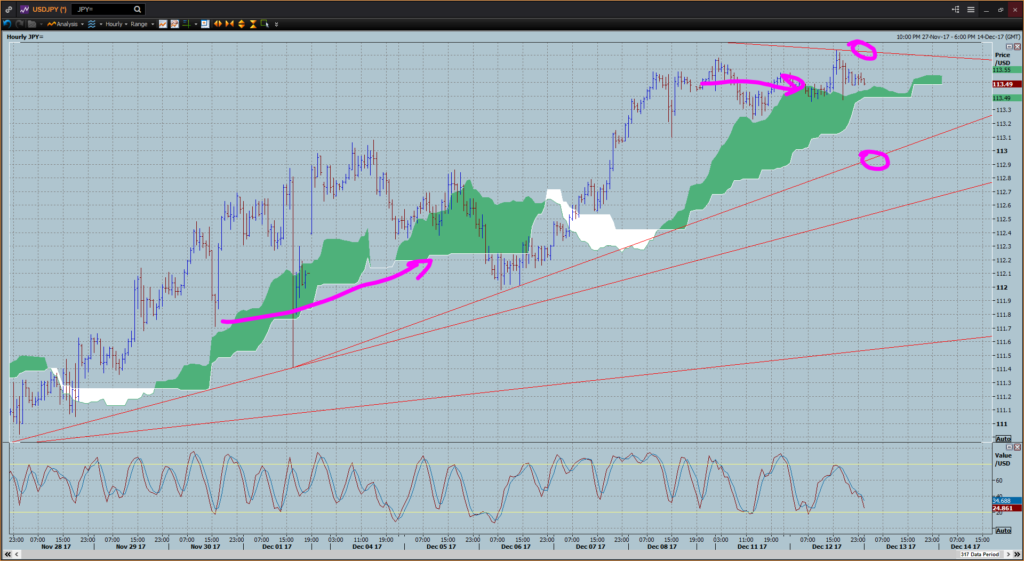 Potential Strategy: The trend for Euro is down so I’ll be looking for data that correlates with this move. 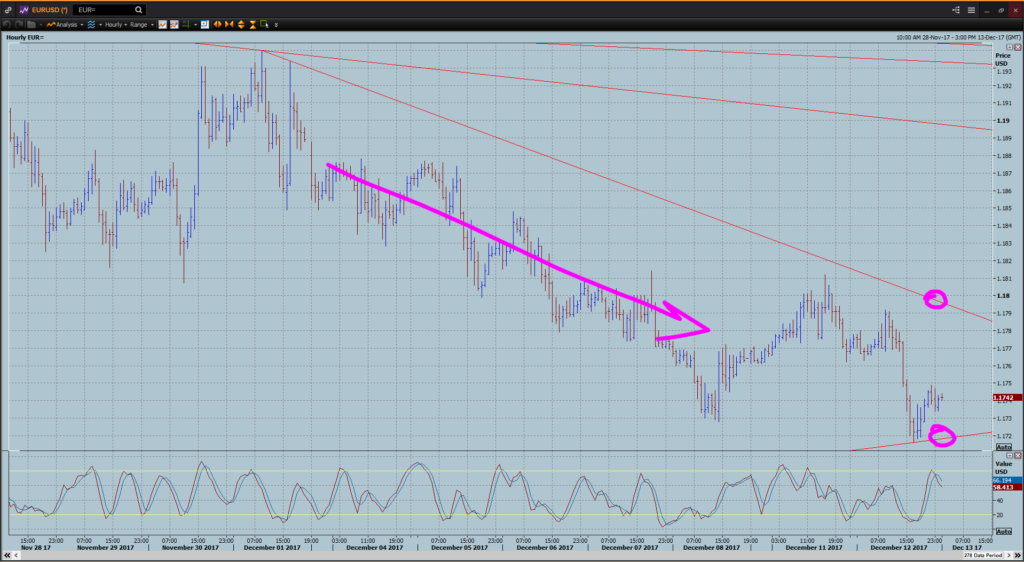