Cause and Effect – To trade with the market

Home/Fundamental Analysis, Popular Articles, Technical Analysis/Cause and Effect – To trade with the market
Previous Next

Cause and Effect – To trade with the market

Trade with the Market, Not Against it!

Ever since I started as a Junior trader (fresh out of university) with Citibank I was trained to ‘trade with the market’ and it’s been my mantra ever since I established Traders4Traders back in 2009. But funnily enough, it’s one of the first questions I’m asked by new traders: “What the hell do you mean?” Well, it’s all about trading the flow of the currencies. Don’t fight them, work with them. The only way to identify the flow of the currencies is: you have to understand the CAUSE and EFFECT.

The Cause = The Fundamentals & The Effect = Technicals

Trading without both of these components is hazardous at best and I believe this is one of the biggest reasons why retail traders are generally less successful trading the fx markets. They have no clear understanding of the ‘Cause‘. To be honest it’s not their fault as there isn’t a readily available source of information on the Fundamentals and the majority of people offering ‘training services’ have no real ‘banking’ experience as an fx trader. So how else are you supposed to know?

I’ll run through the “Cause and Effect” so you have a good understanding of what I mean and how to combine these two key components.

Have you been trading and seen the currencies instantly take off 100-200 points in one direction and wondered ‘what the hell was that‘? Well ‘that‘ my friends are the fundamentals. They are the cause of all currency movement – up and down. It includes central bank announcements/monetary policy, economic data releases and last but not least the dreaded geopolitical events. These three components are the heartbeat behind the financial markets. They ‘cause‘ the markets to move!

The central banks are the most important as they steer ‘investors/traders’ around via their monetary policy and associated statements. It provides clear direction for market players on what will happen should the economic data be either this way or that. So once the market has the forward guidance from the central banks it can then assess the economic data according to their plan. For example let’s take the US Federal Reserve, the most important and powerful central bank in the market. Let’s say after their FOMC meeting the Fed Chairperson Janet Yellen says “we’re on track to keep raising interest rates if the Employment and CPI data continues to improve”. So from this point, investors & traders alike know that if these two key pieces of data are strong then the FED will raise rates again. Higher rates mean stronger currency…so the USD would rally. Buy, Buy, Buy!

So investors & traders wait for these numbers to be released and react in accordance with the result from the expected forecasts. If the numbers are stronger then expected they buy USD immediately because they know the FED will raise rates at their next meeting. Note they don’t wait for the next central bank meeting to act. If the numbers are weaker then expected then they sell USD immediately for exactly the opposite reason.

The economic data is the cause of the currency movement. The central bank can control this to an extent via their speeches & Statement. That’s why the market focuses on these events very closely and that’s why you see all central bank events on your economic calendars in red – meaning a high impact event. This cycle continues month to month from central bank meeting to their next meeting. Traders are continually assessing the central bank speeches and economic data for the next leg of direction in the major currencies.

Can you see now how this is the ‘CAUSE‘ of all market movement and activity?

Check this chart out below it’s full of big moves. Each one of these moves can be attributed to a ‘fundamental’ release’. 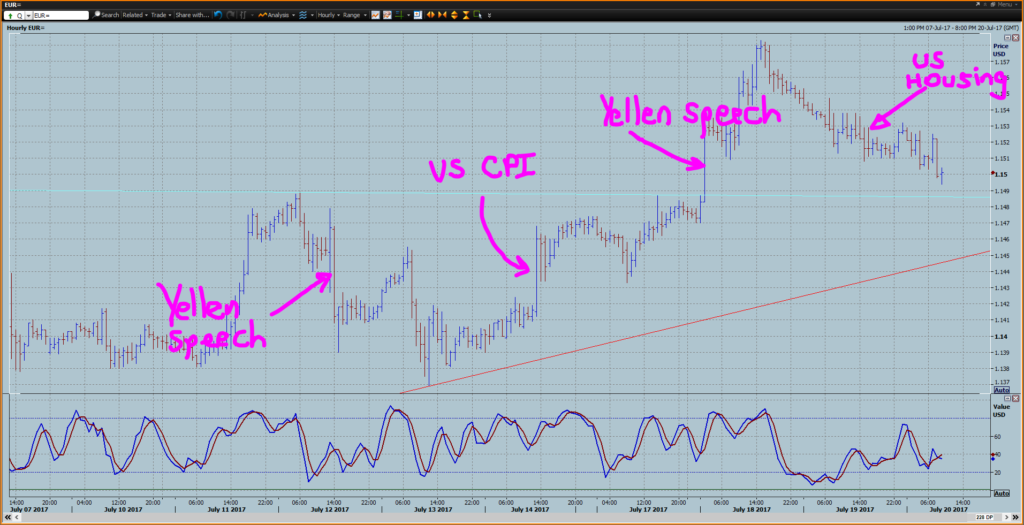 Now I haven’t labeled them all because my writing was a bit dodgy but you can see clearly each major move was caused by an event. Can you see now how crazy it is to use ‘Robots’ or other ‘EA’s’ to make your ‘directional’ trading decisions? They have no idea the economic numbers are coming out. If you’ve used these in the past I’m sure you’ve got a bag full of sad trading stories to tell.

Now for the EFFECT

The resulting effect of the currency movements are plotted on charts and this is your technical analysis. Investors & traders use the technical trendlines to place entry orders in the market. But the technicals wouldn’t even exist if the currencies didn’t move in the first place. But let’s not run the technicals down too much because they also provide great trading opportunities. Because Bank traders globally use technical analysis to place their orders in the market we know exactly where to get in and where to get out. Traders do use momentum ‘indicators’ such as Stochastics or RSI to gauge momentum but it’s more to manage positions then as the main reason to open a fresh position. It’s the trendlines, support, and resistance, which is the most important Effect of the fundamentals that traders focus on.

Now bring the ‘Cause and Effect’ together

If you’re looking to really fine-tune your trading performance then you need to bring these two components together.

The cause gives us specific direction to focus on: either Buy or Sell.

The effect gives us specific entry levels to focus on.

You put the cause and effect together and now you’re getting close to becoming a full-time pro and understanding the true market dynamics.

Take this chart, for example, it’s the same chart as the one above EURUSD hourly. 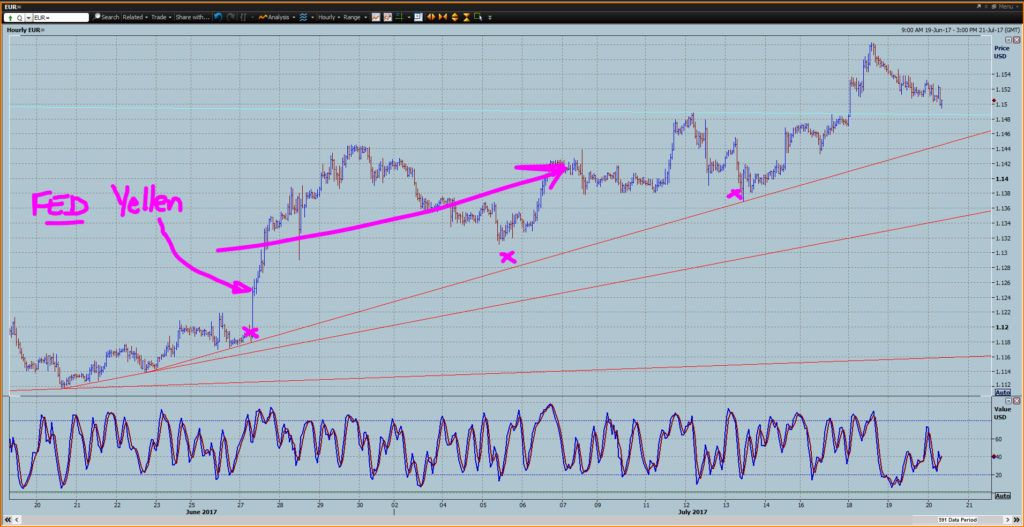 In the chart above this really happened: The FED’s Janet Yellen hinted at a slightly less aggressive view on future rate hikes in the US. This is a ‘SELL’ for the USD so EUR rallied against the USD.

From this point, the ‘effect‘ of this announcement gives us a support trendline. It provides us with actionable entry levels all the way up. It’s these key entry levels which are extremely important to us and that’s why we totally respect technical analysis. Without it, we wouldn’t know where the low-risk high probability entries are!

You can’t survive on the Effect (Technicals) alone

You could survive on just the ‘cause‘ (the fundamentals) alone but you can’t survive with the ‘effect‘ (technicals) on their own. This is because the technicals don’t tell us anything about which way the currencies are going: up or down.

Let me give you an example to explain.

Let’s go back to my very first example where the FED’s Janet Yellen was talking the prospect of higher interest rates up. Then following that announcement the US employment & CPI data was strong which means the direction for the USD was up. If you were sitting at home trading the ‘technicals’ oblivious to the data and direction then you could be trading a range trade, selling ahead of resistance trendlines (or anywhere for that matter) instead of trading a break trade, buying on a break of on the strong data itself.

You could be lucky and get it right and buy USD by chance. Hooray, you got a winner, but it doesn’t really matter because over the course of time you’ll get run over by the fundamentals. Unfortunately, new traders to the market who have no idea about ‘market structure’ are misled into thinking a ‘special robot’ can tell you if the currencies are going up or down…..hahaha I laugh every time I hear that, but that couldn’t be further from the truth.

They put these robots and indicators all over their charts trying to work out, do I BUY or do I SELL?

It’s absolutely ludicrous when the answer is at your fingertips. If only they knew where to look!

Our Pro trader course focuses specifically on the ‘cause and effect‘. This is the core foundation knowledge that you learn Day 1 when you walk into the bank dealing rooms. And it’s the exact one thing retail traders need to get their head around if they want to be a long term successful trader in the market. I spent 7 years putting this course together and I believe it’s the most advanced in the market globally. It’s no surprise the Banks in Australia were utilizing my skills to train their dealers as the new generation didn’t understand the ‘cause and effect‘ methodology. Anyone can make cash on a lucky trade. But year in, year outperformance comes from understanding the market – understanding the ‘cause and effect‘.

Once you have this knowledge you can then build on your foundations and start to enhance your performance by focusing on the finer details in the market and by incorporating strategies to take advantage of specific market setups. If you rush in and start trading without the core foundation knowledge then your trading experience is going to be like so many other traders out there: sad and very short. Believe me, it’s a hell of a lot more enjoyable and rewarding trading with the market, not against it!

If you have any questions or comments, by all means, please respond below. I’d love to get your feedback whether it’s good or bad.