With hardly any economic data of note and with the few numbers that did come out there was very little variance to work with, so there was absolutely bugger all activity!

Of note were two false breaks to the topside in USDYEN on Monday and then again on Thursday. It looks like there’s plenty of sellers still from 114.20-50.

The one major release for the week was UK Manufacturing production on Friday. The numbers were hugely strong yet GBPUSD only managed to jump up 15 points before rolling over and sliding back 20-30 pips, before finally getting a head of steam and punching up to good resistance around 1.3230.

So there was no major flow in the major currency pairs. Trading was disjointed and lack lustre to say the very least.

The problem we have at the moment is a lack of clarity with the USD. So we desperately need some resolution on Trumps Tax reform plans as well as some consistent US economic data.

At the moment the numbers are up one day and down the next, so until we get consistency I’m sorry to say we’re going to be stuck in the ranges with false breaks occasionally expected here and there.

The good news is we’re not going to have to wait all week to get some major economic data.

We’ve got good fundamental drivers all week starting with the European session on Tuesday and finishing with the Canadian CPI data Friday.

There’s no point getting involved at all, so please don’t waste your time in front of the screens waiting for something to happen!

Tune up your charts and then take your dog for a walk, play golf, go fishing, do some gardening, go for a surf etc…

The Asian session will be a waste of time.

Trading really kicks off when the European session starts.

Another snoozer for the Asian session.

But the European & North American Sessions will be very lively with the first major US data in well over a week.

Finally traders in Asia have something to cheer about as we have the first major Aussie release for over a week.

But the European & North American sessions are where the major action will be.

The best part of the week is behind us and we should have a quiet Asian & European session with no data scheduled for release in either session.

The North American session will provide the last momentum driven opportunity for the week.

As I mentioned the majors didn’t do a lot last week. In fact I left the charts on the Hourly’s which usually wouldn’t work for a weekly perspective.

Just goes to show how little trading there was last week. 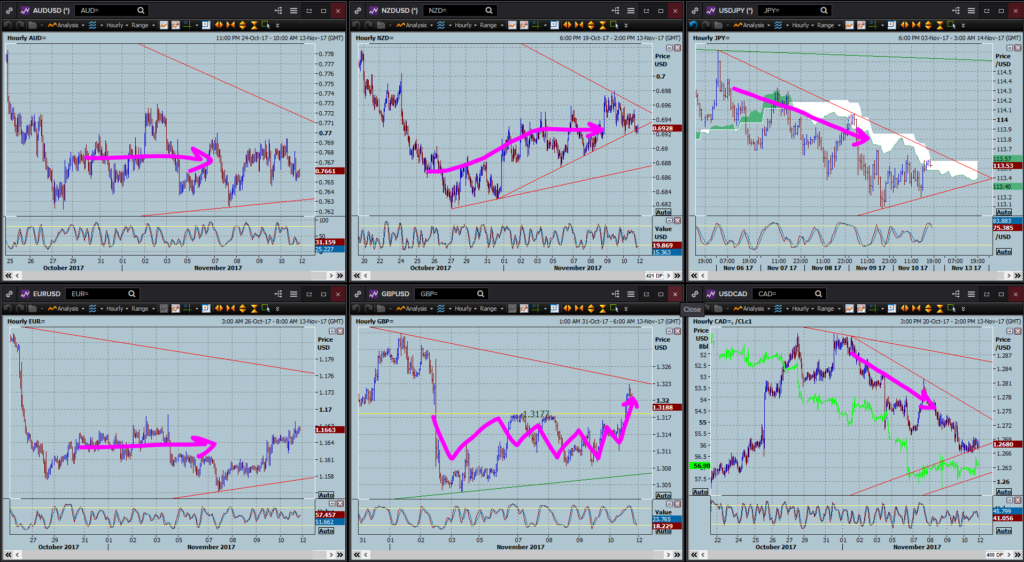 Not a lot to talk about. The Aussie data has been somewhat weak of late and the RBA continues to sit on the sidelines. So we need something out of the USD or the Aussie Employment data Thursday to get the ball rolling.

The RBNZ raised future inflation forecasts and that took the heat out of the downside. Overall the Kiwi is still languishing on the new left wing government policies. No data this week so it should track the AUD.

Two false breaks to the topside last week will have traders holding off any break trades for awhile. US data Wednesday is definitely the key to the next move but until then ipretty much sideways with a slight downward bias.

It’s been grinding away within recent ranges. Had a test of the downside for the first half of last week but failed to go on with it. Then it slowly climbed as negative press on the delayed US tax reform finally saw a modest short squeeze to the topside. Wait for Tuesday’s data to give it some life.

Sterling continued to trade in big ranges driven by UK government scandals & Brexit concerns. If anything it closed last week on a positive note with Friday’s Manufacturing Production numbers very strong. It’s a good lead into the big 3 releases this week.

The Swissie was a big misnomer last week as it basically traded sideways all week with a slight downward bias. We really need something out of the US data Wednesday to get this puppy moving otherwise the sideways trading is going to continue.

The Funds have been pulled from all directions as numerous events impact. BOC Gov Poloz comments had the USD rallying as future interest rate hikes seem off the cards whilst Oil rallied above $57 and general USD weakness set in. It’s been washing around in big ranges but at least now we have the resemblance of new trendlines to work with. Watch Wednesday’s US data & Friday’s Canadian data for the next major move. 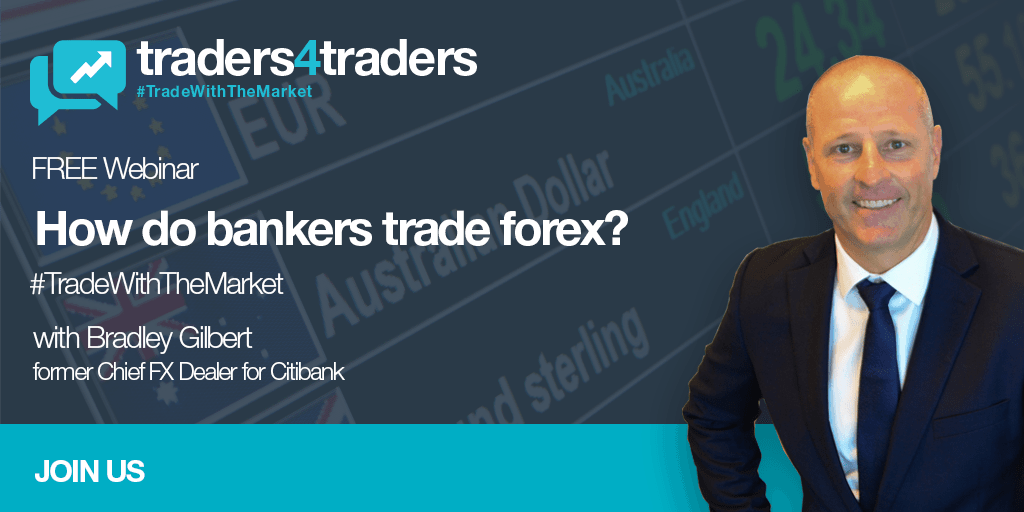 Join us for the 1st of a 5 part Series on: How do Bankers trade forex?

Believe me, Hollywood has a lot to answer for, although a lot of the shenanigans you may have seen on the ‘Wolf of Wall Street’ were pretty close to the money!

Don’t get me wrong, the traders have a hell of a lot of fun but when the market is ‘on’ they are extremely focused!

You’ll be surprised at how much trading they actually do.

Schedule: Check your timezone location below

All up this week has a huge amount of potential with opportunities in all timezones and across most major pairs.

Sterling will of course be the highlight with 3 major releases in a row starting on Tuesday.

For me the key will the US CPI data. All we need is some variance in the data and we’ll start to see a shift in the majors – up or down I don’t care!

The idea of this “Week ahead” is to give you some guidance into your preparation. Make sure you don’t waste unnecessary time in front of the screens.

The key to your sucess: Isolate the days or sessions that work for you and focus in on them. Don’t worry about things that you can’t make.