We want to protect & guide you, not limit your potential!

I’ve been getting a lot of questions lately about the rules for ‘Trading the Economic data releases’. So I just wanted to spend a little bit of time to explain the rules and where the economic data fits in. As many of you know the Fundamentals are the driving force behind the currencies. They give the currencies direction and understanding & utilizing them is absolutely imperative to a successful trading career. The economic data releases are just one of three components that make up the Fundamentals.

Put simply the central banks monitor the economic data and enact policy based on these results against a general inflation framework which they ‘publish’ to the market. The geopolitical issues are just a nightmare that screws everything up & they basically include politics & international relations. Now I know every trader is different. We have had different training and incorporate different strategies……I get it. But what you need to understand is the economic data can one day be your best ally and the next it can dig you a grave and dump you in it.

What we want to do via our Rules is protect you from yourself and from the market on the highest potential impacting economic data releases.

Now that doesn’t mean every high impacting data is included. Absolutely not. If we included every release then you’d never have a position. But there are some numbers that are just outrageous. Going into these releases with a position or trading them straight away after the release is just ‘suicidal’. These specific releases are on our ‘Banned List’.

The main reason for banning these releases is because they generally involved multiple variables being released at the same time and that means the banks ‘pull their liquidity’ just before the release and that leads to bigger spreads and wild price action right on the release. There’s no good to come from hitting the market on these releases. You’re much better off waiting and trading once the dust has settled.

Now not all traders understand that so we’ve put in place specific rules to ‘protect & guide’ you through the carnage of these releases.

The Rules around trading the banned list of economic data are as follows:

You must be flat/square (have no position) in the currency pairs related to the release 5 minutes before the release & you cannot trade until 30 seconds after the release.

That takes out all the wild price action and extreme volatility surrounding these releases. Believe me, after 28 years of trading I can honestly say your account in the long term will appreciate these rules.

If you look at any of the calendars available: Reuters, Forex factory, FXStreet, Daily FX … you’ll see loads of high impacting economic data. Now we don’t want to restrict you taking advantage of these releases. But at the same time, it’s important to understand they too can create short-term extreme volatility. So in my opinion going into these releases with open positions is simply ‘gambling’ rather than trading.

The Rules around trading all other high impacting economic data are as follows:

You must be flat/square (have no position) in the currency pairs related to the release 5 minutes before the release. You can trade as soon as the release is out!

To negotiate the plethora of high impacting events & to save you stressing about when to close out your positions ahead of these releases, we have made it easier by adding the ‘high impacting events’ to our Upcoming Events list on the myFXTradingHub page. 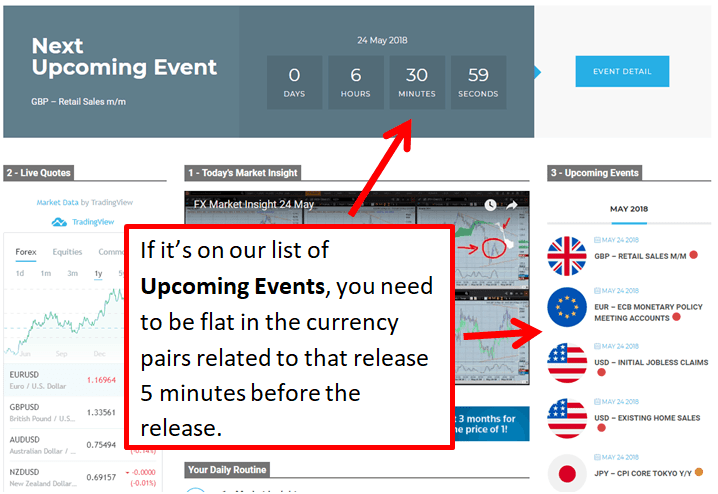 Trading all other economic data releases

If the economic data isn’t on our list of Upcoming Events then you do not have to close your positions before the releases and you can trade however you like on the releases. Be aware, just because an economic data release is low to medium impacting on the calendar, a major variance in that data can and will often cause extreme volatility. So if you have a T4TCapital Trading Account or are in the practical assessment and you come to us saying you blew your account limits because of the data, well that’s your responsibility, not ours. If you choose to dance with the devil, you wear the consequences good and bad.

So that’s basically it.

Be mindful of the Upcoming Events on our myFXTradingHub page.

You also need to understand some data released in one country is high impacting in other countries.

Chinese data is high impacting for the AUD & NZD.

US Oil Inventories is high impacting for the CAD.

US Federal Reserve release is high impacting on all major currency pairs.

Examples of how the rules work:

If we have the Eurozone CPI due for a release. You must be flat EURUSD or any EUR Crosses 5 minutes before the release. And not trade until 30 seconds after the release.

If we have the Chinese Industrial Output due for a release you must be flat AUDUSD, NZDUSD or any AUD & NZD Crosses 5 minutes before the release, but you can trade straight away on the release.

If we have the US Federal Reserve Interest rate decision due. Then you must be flat all major currency pairs 5 minutes before the release. As they all include the USD, and not trade until 30 seconds after the release.

If you have any questions about the rules or this article, by all means, add a comment or send us an email & we’ll be happy to clear it up for you.

There are 54 Million people in the US with a 401K retirement fund of varying sizes, however unbelievably there are 96 Million people that do not have one at all.

Trade with the Market, Not Against it! Ever since I started as a Junior trader (fresh out of university) with Citibank I was trained to…