The U.S. dollar fell after the Federal Reserve raised interest rates and left its rate outlook for the coming years unchanged. Both outcomes were widely expected and it appears the market is initially disappointed that there wasn’t a more hawkish tone form the FED.

But that was never going to be the case with Jerome Powell taking over in 2018.

FED officials acknowledged in their latest forecasts that the economy had gained steam in 2017 by raising their economic growth forecasts and lowering the expected unemployment rate for the coming years. Both Hawkish comments.

The Fed projected three more hikes in each of 2018 and 2019 before a long-run level of 2.8 percent is reached. That is unchanged from the last round of forecasts in September.

The only dovish thing I see in this meeting is the two dissents, which is not unusual but maybe only one was expected.

If you look at the rest of the assessment from officials in terms of the statement and projections, they seem either unchanged or shifting to a slightly more hawkish direction.

The current USD weakness may have more to do with the weaker CPI earlier in the day rather than the FED announcements.

It’s really not that uncommon for the market to get it wrong straight after the meeting. So I wouldn’t be surprised to see the USD snap back and reverse this current move once the ‘big players’ have fully assessed the FED announcements.

Don’t forget we have the BOE & ECB meetings today plus Trumps tax reforms to go through. So I’d say the USD is far from having clear direction.

The USD was already on the back foot in the lead up to the FED announcement after core CPI data showed slowing inflation, raising concerns the Fed will be less able to execute multiple rate increases next year.

Excluding the volatile food and energy components, consumer prices ticked up 0.1% in November, with the annual increase in the core CPI slowing to 1.7% in November from 1.8 percent in October. But don’t forget the ‘Hurricane impact’ may be the anomaly the market isn’t considering.

In saying that the U.S. bond market is pricing in only two rate increases next year. So at the moment traders are calling the FED’s bluff…..only time will tell who is bluffing!

Sterling edged higher ahead of today’s Bank of England policy meeting, which will be closely watched for clues on the future path of UK monetary policy.

While the BoE is widely expected to keep interest rates on hold at 0.5% on Thursday, after raising rates for the first time since 2007 last month, there are questions over whether rates will be hiked again next year – and if so, at what pace.

The Bank said in November that inflation was near its peak and would then fall slowly over the next three years to just above 2%. It also said a long-awaited pick-up in wage growth was likely next year.

But inflation data released on Tuesday exceeded expectations, coming in at 3.1% annually – more than 1% above the BoE’s 2% target.

Today’s BOE meeting gives the Governor Mark Carney a chance to alter his comments from the last meeting & take a more hawkish stance on the inflationary risks in the UK, especially if sterling falls back below 1.3000.

Numbers released on Wednesday showed workers’ total earnings, excluding bonuses, rose by an annual 2.3% during that period, compared with 2.2% in the three months to September. That beat economists’ expectations for no improvement, but was still well below the inflation rate.

Sterling climbed higher against both the EUR and USD hitting highs of 0.8835 & 1.3420 respectively.

Wednesday’s data also showed the unemployment rate held unexpectedly at its four-decade low of 4.3%, against expectations for a further decrease to 4.2% in a Reuters poll of economists.

As well as the Bank of England, traders are also eyeing retail sales data due prior to nthe BOE announcement, and are also watching out for any Brexit developments.

The initial move after the FED Press Conference is clearly USD weakness…but I’m not convinced this is correct.

We should have a clearer view of the market after the BOE & ECB meetings later today, if not before hand. 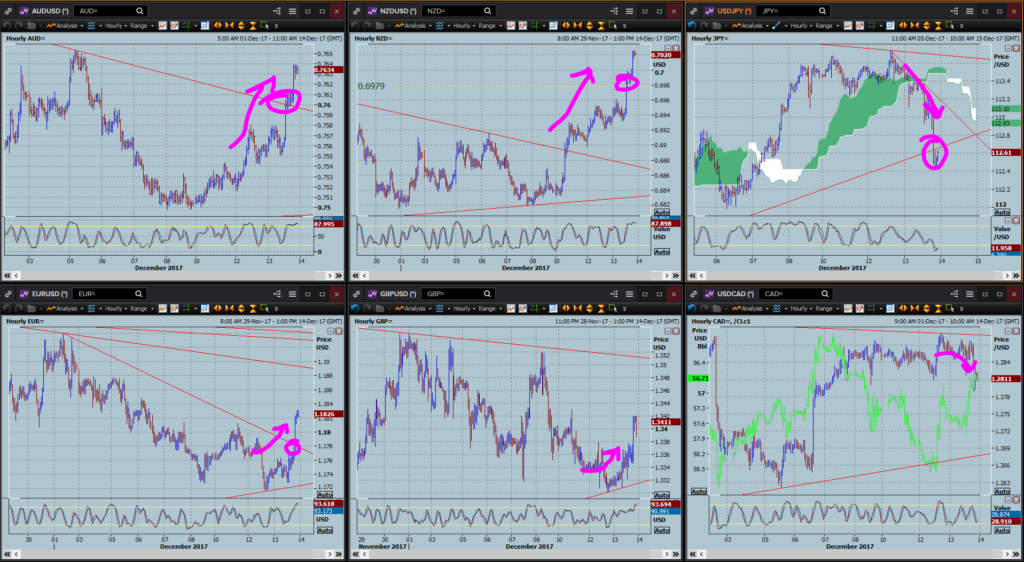 Broke through 0.7600 taking out stops along the way. Focus turns to Aussie Employment data…topside looks the way of it at the moment.

Stops triggered above 0.7000 after FED announcements. Topside is where the momentum is but it looks like it’s running out of steam.

The Beast has broken lower but it keeps restesting 112.65 as though it’s undecided where it’s going. Oversold at the moment so I’m thinking we’ll see it squeeze higher during the Asian session.

This is a tough currency to trade at the moment. Beware Brexit and BOE today.

Dipped down to 0.9840 after the FED but it’s now bouncing. We should know where it’s going after the ECB announcement.

Whipping about around the FED announcement. Oil is falling so I like it higher from here once the dusts settles from the FED.

OK this is a tricky one because as I mentioned I don’t think USD direction is clear right at the moment. In fact I’m starting to like the USD higher. If I’m right then we’ll see some nasty moves over the next 24 hours.

Traders will be very conscious of the BOE & ECB meetings later today…and that may be enough to keep traders on hold.

The Asian session could be really good today with key Aussie employment and Chinese data today.

Because the AUD is in the middle of nowhere it could really go anywhere. But if the USD rallies like I suspect then weak data could be a really solid medium term trade. But at the moment the topside looks the side to hit.

On the short term front I’ll be trading with the data (strong or weak)… if the AUD and Chinese data correlate then that’s the trade. If not stay out.

Once we hit the European session it’s gloves off for Sterling, with retail sales data followed by the BOE announcement.

Now Sterling has been tricky at the best of times so today’s data is going to be ‘way too hard’ so I’ll be watching from the bleachers.

There are too many variables to consider: BOE, eco data, Brexit etc…..

The ECB meeting isn’t getting much hype so I’m not sure what’s going on there. We do not expect any changes in rates of course so Draghi’s press conference will be key to any moves. And with EUR being 58% of the USD Index basket we may have to wait fore the ECB to be out of the way before we see the true USD move.

The North American session will definitely be active as the market repositions itself around the US retail sales & weekly Jobless claims data.

All and all it’s a solid 24 hours coming up.

There’s so much data scheduled today I could hardly fit it all in on the screenshot, even after decreasing the font size.

It’s a monster day right on the coat tails of the FED. It could be wild if there is significant variance.

The trick is; isolate USD direction. If the data fits in with this direction trade it. If not stay out. 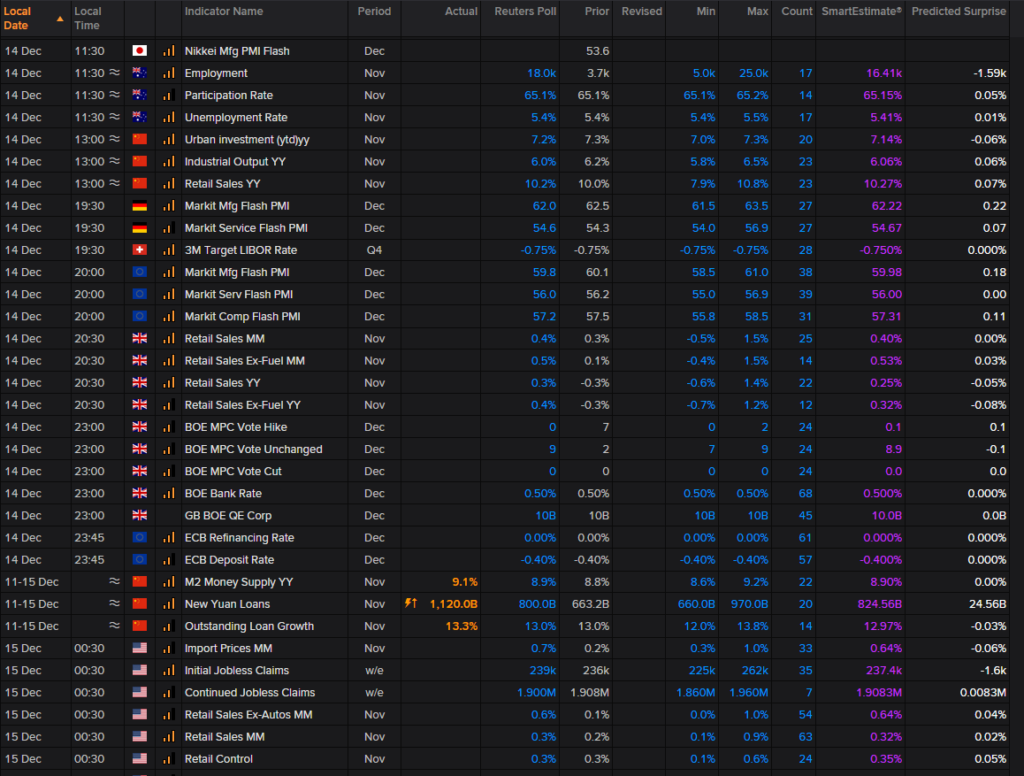 Potential Strategy: Current momentum is up, so trade with it if the data is strong. 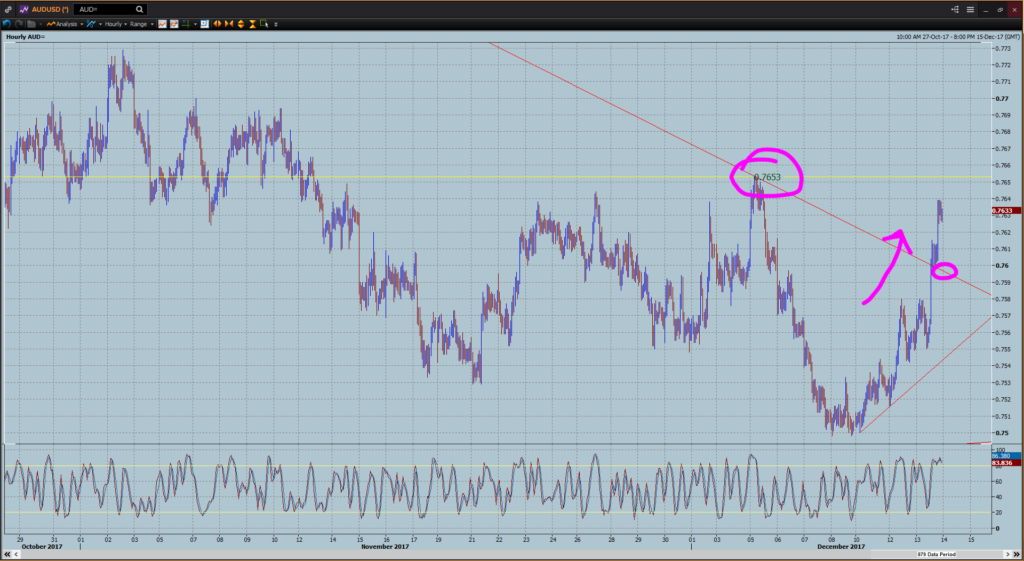 Potential Strategy: Momentum is currently up so trade with it. 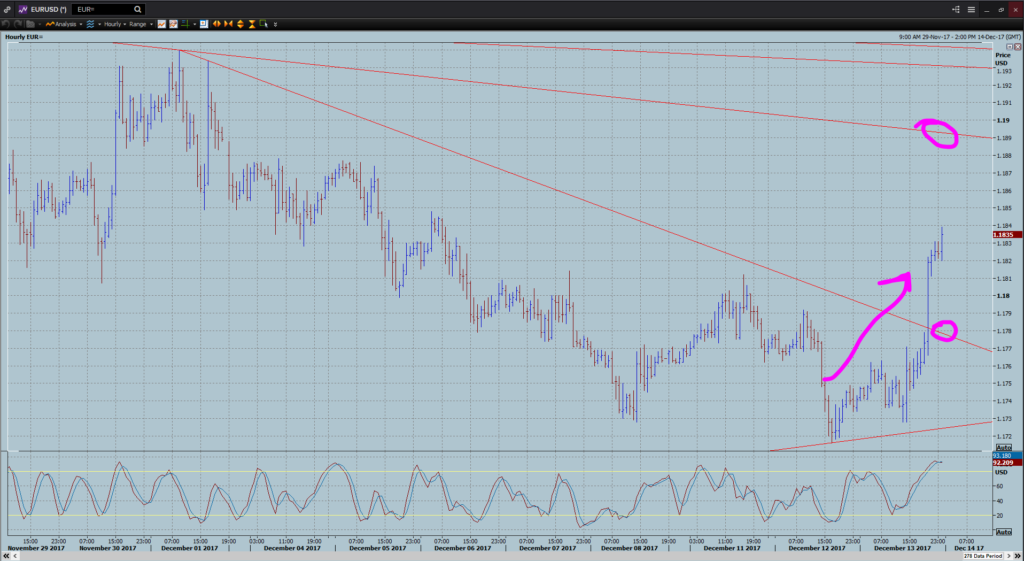 Potential Strategy: It’s going to be wild and woolly. BOE Gov Carney is the key…watch his statement closely. 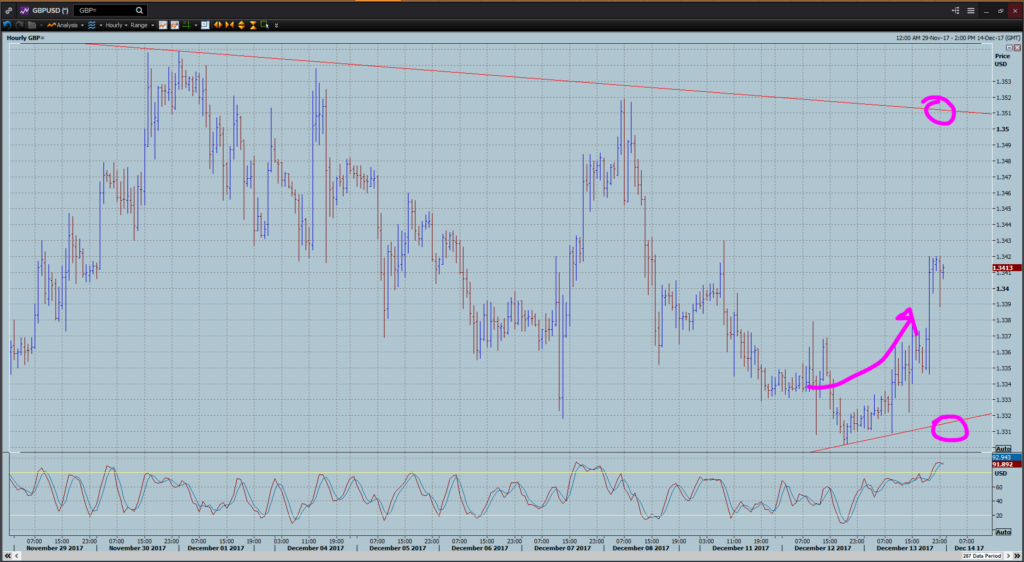