We had another odd week of trading last week with Brexit driving Sterling momentarily above 1.3500.

There wasn’t a huge amount of data so trading was pretty quiet as the market awaited further news on the US tax bill. It wasn’t until late Friday that we got news that the tax bill got passed by the Senate and now goes back to Congress for reconciliation.

But before the ink had time to dry on the press release about the tax bill ABC News reported that Michael Flynn, a former adviser to U.S. President Donald Trump, said he was prepared to testify that Trump directed him to make contact with the Russians when he was a presidential candidate.

This reversed the US move very quickly. The dollar index dropped down to 92.60 before bouncing back to 93.18 on the Monday open.

Sterling has also been all over the shop on various Brexit updates. It initially rallied early in the week after a newspaper reported that they had agreed on a Brexit payout. Once it broke above 1.3445 Daily Resistance it was off to the races and hit a high of 1.3550.

But issues with the Northern Ireland border are creating issues and putting bit of a negative spin on things and that’s creating extra volatility on Sterling. It drifted lower on Friday hitting a low of 1.3427.

The Euro had bit of a cleanout on the downside after weaker German and Eurozone data squeezed out longs hitting a low of 1.1807. But it quickly recovered and is now back trading mid range at 1.1875.

The Funds was the big move with a huge 200 point drop after stronger GDP and Employment data on Friday. That data gives the pair a solid downward bias to start the week.

The US news from Friday and the weekend is a bit tricky to interpret so the markets are going to be a little loose to start the week. I think it’s wise to stand back and let them thrash about until we get full liquidity back in the market.

It’s the start of a new month so we have loads of economic data this week. There’s loads of data across all trading sessions so we’ll have plenty of opportunity this week with the wild US Non-farm payrolls scheduled for Friday.

There’s not a lot of data on Monday and with the mixed geopolitical news out of the US it’s wise to stand back for a day and see where everything is once the dust settles.

The Asian session will kick into gear with the RBA meeting.

Then we’ve got a few bit’s and peices out of Europe. The North American session will come alight with some more Canadian data.

We’ve got data across all sessions so there’s a bit for everyone.

We’ve got a few key releases with the Aussie and CAD both with follow up data.

There’s a load of data scheduled for Friday with the major focus the US non-farm payrolls.

The majors are all over the shop on geopolitical issues. Sterling with Brexit and the USD on the US tax bill and Russian probe involving Trump.

At least this week we have loads of economic data to focus on. 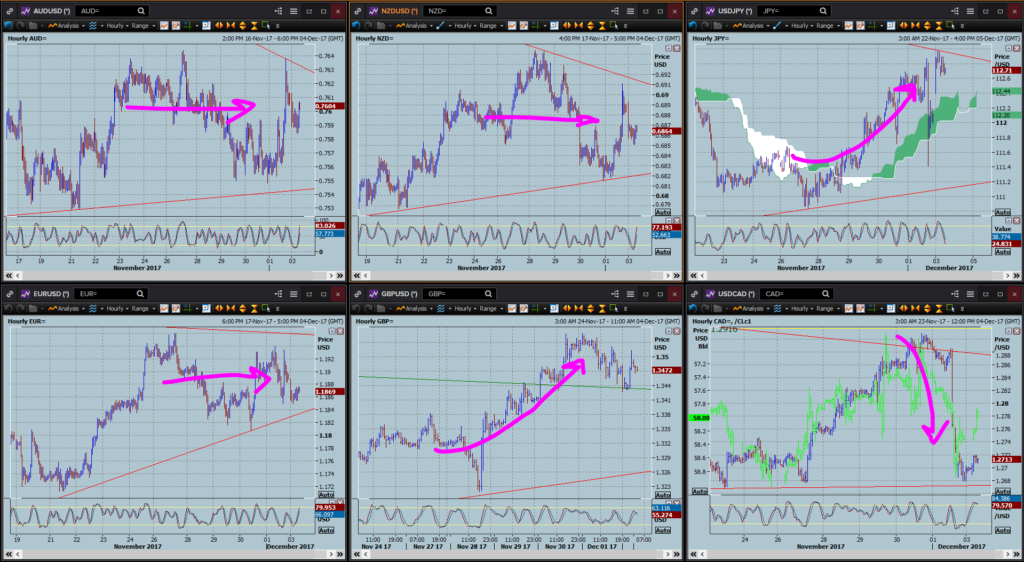 The Aussie moves into the spotlight this week with the RBA meeting and GDP data on Wednesday. It lacks momentum so we desperately need some good numbers to get it moving again.

The Kiwi is all over the shop as mixed NZ data collides with varying US data. Overall it’s still going down but it’s not exactly in a straight line so it’s been a tough trade of late.

Continues to gyrate on mixed US news. We don’t exactly have clear directioin at this point although if the US tax bill gets throughh Congress that should be USD positive.

It lacks solid momentum either way. So it’s a good thing we have loads of Eurozone and US data this week to hopefully give it direction.

Most trading activity is coming from random Brexit updates so it’s hard to judge momentum shifts at the moment. Friday’s Manufacturing data is the pick of the data for Sterling.

The Swissie is following the USD Index pip for pip. It’s also experiencing whipsaw price action on the mixed USD news. No specific direction at the moment.

The Funds are back in the spotlight after Friday’s huge data led to a 200 point move to the downside. Focus now turns to Wednesday BOC meeting.

We have a solid week of economic data so thats a good thing.

But we also have a bunch of ongoing geopoliticial issues that continue to randomly impact, and that’s a bad thing.

My plan is to focus on the data and look for short term trading opportunities.

We could possibly start to look for longer term trades if the US tax bill gets through Congress. But we also need this Russian probe to go away to really get clean trading conditions otherwise we could be back to choppy directionless trading.

Trading is so much easier when the USD has clear direction, so lets’ hope these geopolitical issues get sorted out pronto.

Non-Farms on Friday is always a huge build up, although it’s not always the best trading event. We really need to see how the technical set up is in the lead up to the release.

Anyway there’s loads of potential so tune up your charts & get ready to trade.